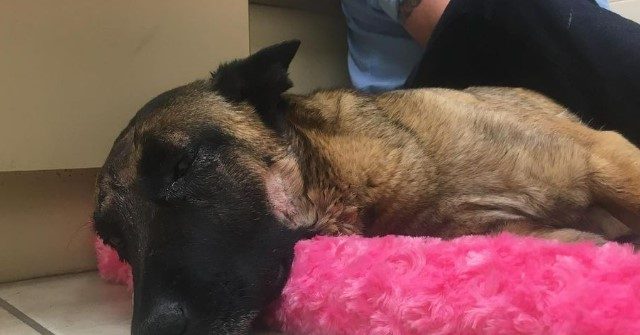 A loyal dog was ready to lay down her own life to rescue her best friend during a recent mountain lion attack in Northern California.

A few minutes after twenty-four-year-old Erin Wilson parked her truck and began walking down a trail to the Trinity River, the unthinkable happened, NPR reported Saturday.

“I’m just walking down the slope and the dog had run ahead of me. And I turn around and there’s this cat just growling at me and it reaches up and it swipes at me,” she recalled of the harrowing incident. “At first, I was just like, Wait, what? And I think I screamed and I shouted for Eva and she came running.”

Eva is the young woman’s Belgian Malinois, a breed the American Kennel Club (AKC) said “forges an unbreakable bond with his human partner.” They are also “highly sought after as police and military K-9s.”

Despite the danger, Eva instantly went into protection mode and tackled the massive cat. However, the animal’s jaws clamped down on her neck and the situation grew even worse.

“My fight mode kicked in and I started picking up rocks and I was bashing in its skull as hard as I could,” explained Wilson.

Moments later, she ran back to her truck for a crowbar and alerted a motorist named Sharon Houston, who grabbed a PVC pipe out of her own trunk.

They worked together to fight off the animal until it let go of the dog and ran away. Eva got up and Wilson eventually put her into their vehicle then sped down the road to a vet’s office.

Houston detailed what happened during an interview with Fox 40:

Eva suffered skull and jaw fractures, a swollen eye, and spent several days in recovery. Wilson created a GoFundMe page to cover her beloved dog’s vet bills and said in a update on Thursday she appeared to be feeling much better.

“My dog is my hero and i owe her my life,” Wilson wrote on the fundraiser that as of Saturday had raised $32,354.