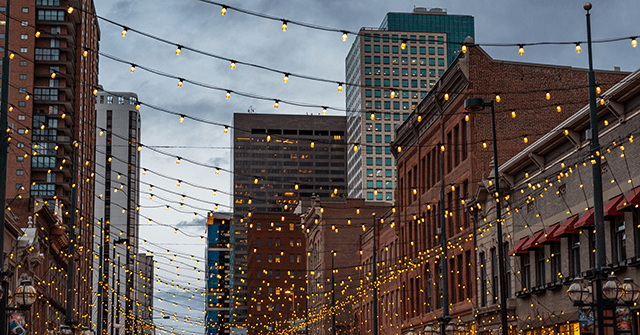 Police in Denver, Colorado, have been grappling with an increase in crime in the city’s downtown area and the number of vacant storefronts has also grown.

Downtown at 16th and Champa Streets has one of the city’s top three highest concentrations of drug and alcohol crimes, along with Union Station and Civic Center Park, according to a FOX31 Data Desk report. The intersection of 16th and Champa recorded 53 crimes, many of them alcohol-related, between Jan 1 and Dec. 1, 2021.

A new program by the Downtown Denver Partnership is now literally paying business concepts to call 16th Street home, with the Champa intersection one of the targeted areas for the Popup Denver program.

The program seeks to work alongside property owners to use empty spaces to attract fresh businesses.

Together, @DowntownDenver & @DenverOED are launching Popup Denver, allocating $20,000 to select entrepreneurs to run temporary popups in vacant retail spaces on the 16th St Mall. Register for an info session, apply for the program, & get more details at https://t.co/S2yo877DQG pic.twitter.com/Vl4fzJfiMH

The Popup Denver website said it is “Reimagining Downtown, One Storefront at a Time.”

“In this first phase of the program, five businesses selected through a competitive process will each be awarded a $20,000 package in interior design, setup and merchandising support,” the site continued.

Recent Federal Bureau of Investigation (FBI) statistics found crime increased approximately nine percent in Colorado between 2019 and 2020, making it the fifth-highest increase in the nation, according to CBS Denver:

Over the last three years, violent crime alone has risen 17% in Colorado, including a 47% increase in murder. Commercial burglary is also up 48%, auto theft rose 86%, and identity theft 226%. There’s also been a 2,400% increase in seizures of fentanyl. Colorado now has the fourth-highest recidivism rate in the country. Half of all people released from prison re-offend in three years.

Now, leaders hope the program will cut down on crime and help promote more business.

“There are a lot of really great reasons for people to come back downtown and positive energy tends to push out negative activities,” commented Sarah Wiebenson of the Downtown Denver Partnership.

“We want them to be bringing in lots of people and to have a wonderful customer base, and so that’s one criterion that will help existing businesses,” she added.