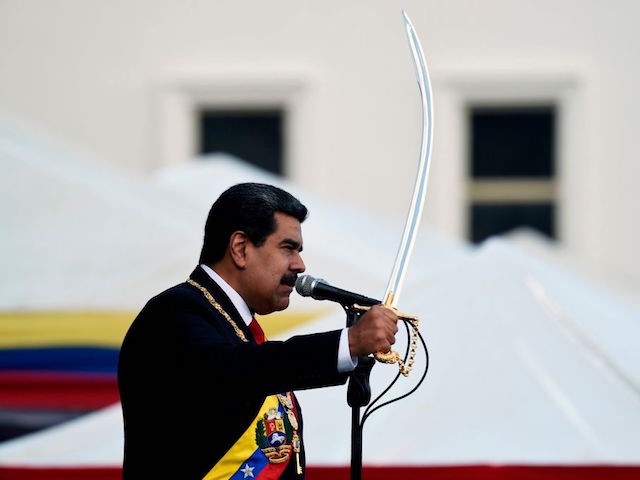 “I hold Donald Trump responsible for any violence and blood spilled in Venezuela, you are responsible even if you do not show your face and send Pompeo, Pence, your hands will be full of blood if you take Venezuela to violence,” he later added in Spanish.

In a separate Facebook address, entitled “We Will Not Allow Another Vietnam,” the 56-year-old dictator also urged Americans to be skeptical of the media, assuring them that Venezuela is actually a “strong democracy.”

“I want to send a message to the people of the United States to alert them of the campaign, the media, communications, and psychological war developing in international media and particularly the communications platforms in the United States against Venezuela,” Maduro said, as the U.S. steps up its efforts to remove him from power through the use of economic sanctions and the threat of military action.

“They have prepared a campaign to justify a coup d’etat in Venezuela that has been prepared, financed, and actively supported by Donald Trump’s administration, as the public know,” he continued. “A campaign of false images, of distorted images, of doctored images, has been expedited.”

It is not the first time that Maduro has struggled to get across his message in English. In March 2017, he was widely mocked for attempting to say to Trump: “Please, open your ears. Don’t let them come to you.” Although there were varying opinions on what he was trying to say, the overall consensus was that he was urging Trump not to take a hawkish stance against his regime.

A few months later, as relations between the two men soured after Trump’s administration began efforts to remove him from power, Maduro sent another barely comprehensible English language message to Trump and then-Colombian President Juan Manuel Santos over their condemnation of his socialist regime.