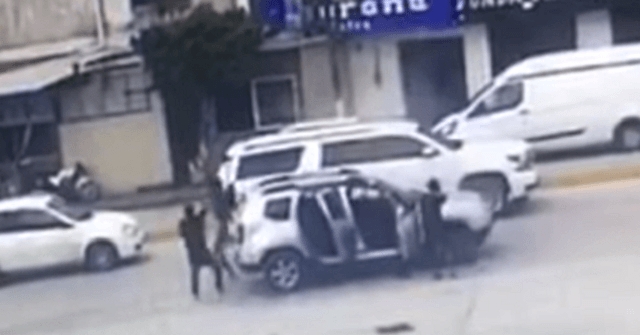 A team of cartel hitmen launched a brazen daytime attack on a motorist earlier this week in southeastern Mexico. The attack left the targeted driver dead from multiple gunshot wounds.

Police in the municipality of Macuspana, Tabasco, responded to a report of shooting this Thursday afternoon at approximately 4 p.m., according to local media reports. A request for assistance indicated that an armed attack occurred in the center of the city directly in front of the Marín gas station near the José Narciso Rovirosa roundabout.

Police and military personnel along with paramedics arrived at the scene and discovered a lone male occupant inside a white Suburban  The driver died from multiple gunshot wounds. Witnesses reported seeing several men traveling in at least two vehicles pull up to the victims Suburban which was stopped at a traffic signal. a group of men exited their vehicles and launched an armed attack on the Suburban directing numerous handgun and rifle rounds at it before fleeing.

A security video camera captured the cartel hit. Officials released the video on social media and local news outlets. The surveillance video captured the moment when the attackers pulled alongside the white Suburban and carried out the attack.

The surveillance video shows the white Suburban in traffic behind a large bus. The video captures the moment the attackers pulled alongside the victim’s truck and the occupant’s exit and immediately opened fire on the victim. The victim attempted to pull away but came to an abrupt stop as the shooters carried out what appeared to be an amateurish attack.

Panicked citizens walking along the street and in the parking lot of the gas station can be seen scurrying out of the line of fire. During the attack, a second bus that appears to be local public transportation is observed traveling in the opposite direction on the other side of the street directly in the line of the cartel gunfire.

The original gunmen hurriedly get back into their truck as a second team of shooters appeared to arrive in a separate vehicle. The gunmen can be seen firing from the rear before fleeing.

Robert Arce is a retired Phoenix Police detective with extensive experience working Mexican organized crime and street gangs. Arce completed work assignments in the Balkans, Iraq, Haiti, and recently completed a three-year tour in Monterrey, Mexico, for the U.S. Department of State, International Narcotics and Law Enforcement Program. As the Regional Program Manager for Northeast Mexico in charge of the Mexican states of Coahuila, Tamaulipas, Nuevo Leon, Durango, San Luis Potosi, Zacatecas) You can follow him on Twitter or reach him at robertrarce@gmail.com.