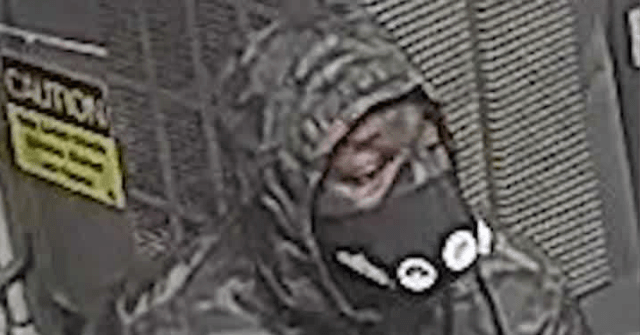 A masked burglar was caught on video as he dragged a customer across the floor inside a McDonald’s restaurant in Orange County, Florida, on Tuesday.

Surveillance footage released by the Orange County Sheriff’s Department shows one of three suspects as he exits a black BMW when it pulls up outside the restaurant around 4 a.m.

Video footage from inside the building then shows one of the suspects pulling a customer across the restaurant’s floor by his shirt as the other two men go behind the counter.

Deputies said the employees were held at gunpoint inside the freezer and demanded to be told where the money was kept.

The video also shows the thieves opening the safe and removing its contents as the customer lays on his back nearby with his hands raised.

The men place the money into bags and their own pockets and flee before police arrive at the scene.

Thankfully, no one was hurt during the robbery, but officials said the McDonald’s employees were not sure how much money was taken because they had not yet counted all of the tills when the incident took place.

Do you know these men? They robbed a McDonalds at gun point on S. OBT November 5 around 4:00AM.
Detectives are asking for anyone with more information to please contact @CrimelineFL at 800-423-TIPS You could be eligible for a reward. pic.twitter.com/6nuzHPQuh0

In August, business owners in Orange County were concerned after a string of smash-and-grab burglaries occurred over the span of two weeks.

“Officials said nine burglaries were reported in five shopping centers in less than an hour Sunday. That’s in addition to four last week and one Thursday,” according to WFTV.

One of the burglaries caught on surveillance video happened in the early morning hours near South Apopka Vineland Road. However, the suspects got away with thousands of dollars worth of electronics and $900 in cash.

“They did say they’re seeing an increase in crime in this area,” said Kay Hodgson, who owns the Woofgang Bakery located just a few miles away that was burglarized the same morning. She noted that it was the third time she has been targeted in the past two years.