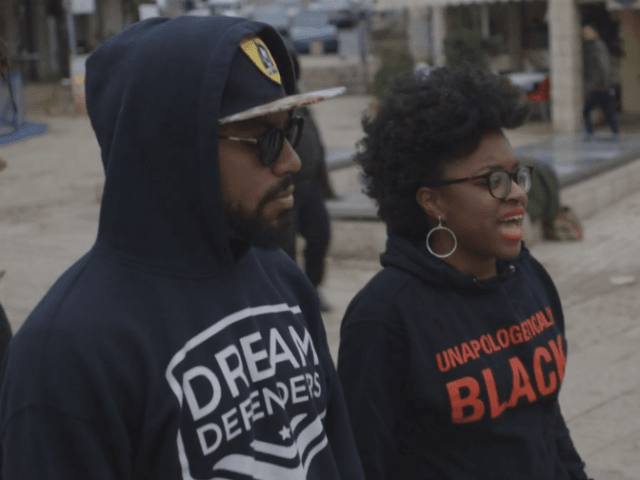 An organization that has a close relationship with Florida Democratic gubernatorial candidate Andrew Gillum organized a flash mob in Israel to officially endorse the extremist Boycott, Divest and Sanctions (BDS) movement targeting the Jewish state.

The flash mob was captured on video by the organization in question, Dream Defenders, and included one delegation member, activist and journalist Marc Lamont Hill, refer to the location where the video was shot, the Israeli city of Nazareth, as “Palestine.”

“We come to a land that has been stolen by greed and destroyed by hate,” stated Hill. “And we stand next to people who continue to courageously struggle and resist the occupation.”

The term “resistance” has been utilized by Palestinian groups to refer to terrorism targeting Israelis.

The Dream Defenders video, which can be viewed above, opens with one activist explaining that, “We are about to have a flash mob and specifically calling for a boycott, divestment and sanction of the state of Israel.”

Dream Defenders Co-Director Phillip Agnew, with whom Gillum has evidenced a close personal and professional relationship, leads the group in a song with the lyrics, “We who believe in freedom cannot rest until it’s won.”

The video was taken during a January 2015 solidarity delegation to the Palestinian territories organized by Dream Defenders under the banner “Delegation to Palestine.”

Upon returning to the U.S., Dream Defenders’ Agnew penned a piece in Ebony magazine about the visit subtitled, “No, Mr. President, There’s No Comparing Israel and the Civil Rights Movement.”

In the article, Agnew referred to the entire state of Israel as “cold, calculating racism and ethnic privilege masquerading as a Jewish State.”

In January, I joined a delegation of organizers from the United States in a pilgrimage to Palestine.  What I saw there was cold, calculating racism and ethnic privilege masquerading as a Jewish State.

The Dream Defenders fully support the growing BDS (Boycott, Divest, and Sanction) movement and will continue to stand with Palestinians struggling to secure their freedom and equal rights against Israeli and US persecution.

There is no direct line from Zionism to the Black Freedom struggle. No rhetorical imagination-acrobatics can conjure one and no amount of intimidation can chart one. It is a racist, exploitative, and exclusionary ideology; its eagerness to attack and silence detractors is only matched by its eagerness to co-opt the struggles of Blacks in this country (by a Black in this country) for its own survival.

Dream Defenders’ website similarly refers to the entire state of Israel as the “site of a continued settler colonial project.”

The organization is a stanch supporter of the anti-Israel BDS movement.

“I do not support BDS,” Gillum said in a statement published by the Miami Herald. “A two-state solution is the only solution that truly pushes us towards peace. I’ll always support the right to free speech and peaceful protest, but I also believe that any tactics that seek to counter a two-state solution makes our path to peace harder.”

Dream Defenders’ Agnew recently described a long and close working and personal relationship with Gillum and said he considers Gillum to be “part of the movement.” Dream Defenders Action Fund, the electoral and c4 nonprofit arm of Dream Defenders, was part of a progressive coalition that reportedly committed $3.5 million to help Gillum win the Democratic primary against Gwen Graham.

Gillum and Dream Defenders’ Agnew are so familiar with each other that while he was a city commissioner in Tallahassee, Gillum himself penned a glowing profile promoting Agnew and the activist’s work founding Dream Defenders titled, “We need more Phillip Agnews.”

Gillum, who would go on to become Tallahassee mayor, gushed in the March 2014 profile: “We must learn from the successes of young leaders like the Dream Defenders and recruit, train, and connect thousands more local organizers and activists, particularly in underrepresented communities and regions of the country.”

As Breitbart News reported last week, a simple perusal of the website of Dream Defenders, the organization so feverishly championed by Gillum, evidences the open radicalism of the group. The organization calls for an “end” to “disaster  capitalism,” rants against Independence Day and spreads malicious falsehoods about Israel.

The Dream Defenders association is not the only pro-BDS tie that Gillum has evidenced. Breitbart News also reported that Gillum in February 2016 delivered an in person welcome and message of encouragement to attendees at an event organized by the controversial Council on American-Islamic Relations (CAIR) that boasted as one of its main two agenda items support for the BDS movement targeting Israel.

In other controversial remarks unearthed in recent weeks, Breitbart Jerusalem reported that Gillum called Donald Trump’s historic decision to move the U.S. embassy to Jerusalem “unnecessary” and a “provocation” that has “incited more violence.”

In the audio, Gillum defined those purported “actions” as including alleged Israeli “outsized response” against Palestinian threats while claiming alleged Israeli disproportionate “firepower” and “pushback” are primary causes of regional instability.

Gillum’s comments on Israel could become an issue for him in the Florida election where Jewish voters have long been a key component of the state’s electorate. Gillum, whose views on Israel are largely unknown, is running against staunch Israel supporter Ron DeSantis.