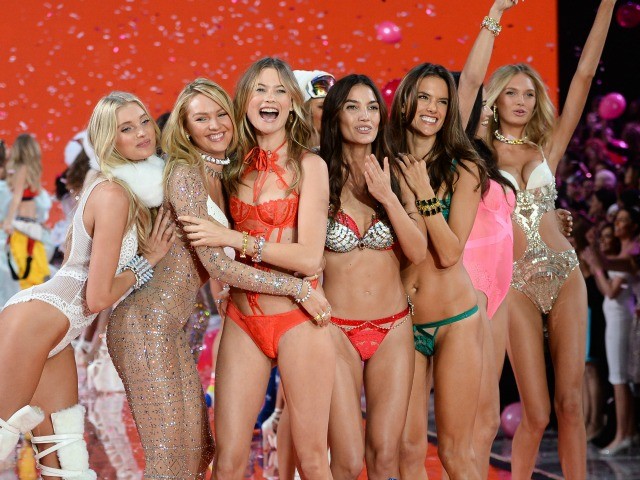 Razek’s statement came after progressives and transgender activists rallied on social media to complain he was excluding men who live as women from the brand’s glitzy idealization of women’s sexual power.

Razek sparked the dispute when he told Vogue that the company uses different fashion shows and different brands to target different groups of women:

I think we address the way the market is shifting on a constant basis. If you’re asking if we’ve … looked at putting a plus-size model in the show, we have. We invented the plus-size model show in what was our sister division, Lane Bryant. Lane Bryant still sells plus-size lingerie, but it sells a specific range, just like every specialty retailer in the world sells a range of clothing. As do we. We market to who we sell to, and we don’t market to the whole world.

But the company is under constant social media pressure to weaken the hugely valuable brand by sharing its feminine glamor with non-targeted groups, he said. “The hate that’s on social media, it’s extraordinarily toxic … Where does it end?” he said, adding:

Introducing the $1 Million Dream Angels #VSFantasyBra, worn by @elsahosk & designed by Atelier Swarovski. See it sparkle on the runway in the #VSFashionShow, Sunday, Dec. 2 at 10/9c on @ABCNetwork. https://t.co/uCo2JsirUy pic.twitter.com/f1BnlX3QYE

Progressives and men who want to be glamorous women complained bitterly about their being excluded from the brand.

In response, Razek rapidly backtracked and issued a press statement saying he hoped a “transgender model” would be used in a show. But he carefully did not promise to hire a transgender model, saying:

The Tweeted message, however, excluded the “hope” comment from the email statement sent to ModernFashionNews.com:

“My remark regarding the inclusion of transgender models in the Victoria’s Secret Fashion Show came across as insensitive. I apologize,” Razek said via email. “To be clear, we absolutely would cast a transgender model for the show. We’ve had transgender models come to castings … And like many others, they didn’t make it … But it was never about gender. Honestly, I really hope that a transgender model will make the show soon. I admire and respect their journey to embrace who they really are.”

So far, many business groups have made cost-free political alliances with transgender advocates, usually via the companies’ long-standing support of gay advocacy groups. But some companies — notably Target — have suffered badly when their customers resist the company’s imposition of pro-transgender ideology on their preferences. RuPaul, a gay activist, has also been slammed for excluding transgender people from his televised mockery of heterosexual Americans.

In the Victoria’s Secret dispute, Razek created a backlash by explaining the brand’s business case for avoiding transgender advocacy.

The progressive complaints aimed at Razek and the brand were personal, aggrieved and did not include any business arguments for changing the brand’s image.

Doubling down on the hateful speech, Razek used the justification of the show being “fantasy” to excuse the lack of casting of transgender models (whom he called “transsexuals,” a term that is often but not always considered pejorative). “Shouldn’t you have transsexuals in the show? No. No, I don’t think we should,” he said. “Well, why not? Because the show is a fantasy. It’s a 42-minute entertainment special. That’s what it is.”

This was a powerful white man — caught on the record — asserting a disregard for truth and an unflappable arrogance toward the livelihood of other human beings. Sound familiar?

In reality, Trump is using his authority to clarify that the sex of people involved in sex-discrimination legal fights will be based on their male or female body, not on their claimed “gender identity.”

Jezebel covered the Razek statement by emphasizing the personal:

The 70-year-old Razek, who is part of the casting team that chooses the models for each show, gave some bizarrely out-of-touch answers in the interview, lambasting critics as being “haters” who want too much diversity in the show and describing trans models as “transexuals.” He comes off as a complete joke and absolute asshole and is clearly the reason the company is stuck in 2005.

Men who live as women used Twitter to make their voice heard:

Fantasy can be whatever you want it to be and if that intentionally doesn’t include trans women, then that’s your prejudice talking. The reality is that trans women are desired by many, to suggest otherwise is shortsighted and without doubt transphobic.

However, critics of the Transgender Ideology scoffed at the progressives’ demand that Victoria’s Secret include a transgender man in their line-up of models:

Listen to how angry these feminists are that Victoria Secret models are hot, skinny, and…….women.https://t.co/4Nxz93fJQO

Good. It’s, their brand, their choice. People don’t think “Victoria’s Secret” and think of bearded ladies (Like the one that won a pageant earlier) or those on the more plush size (Which can be nice too) let alone dead-of-heart-attack-by-40 size. They’re fit healthy women.

The transgender movement is diverse, so its different factions have different goals and priorities.
It includes sexual liberationists, progressives, feminists who wish to blur distinctions between the two sexes, and people who glamorize the distinctions between the two sexes. It includes high-profile children, people who are trying to live as members of the opposite sex, and people trying to “detransition” back to their sex, men who demand sex from lesbians, masculine autogynephiles, wealthy donors, politicians, political professionals, and medical service providers.

Transgender advocates claim that 2 million Americans say they are transgender, to a greater or lesser extent. But very few people who describe themselves as transgender undergo cosmetic surgery of the genitals. Only about 4,118 Americans surgically altered their bodies in hospitals from 2000 to 2014 to appear like members of the opposite sex, according to a pro-transgender medical study.

The progressive push to bend Americans’ attitudes and their male and female civic society around the idea of “gender identity” has already attacked and cracked many of the popular social rules that help Americans manage the cooperation and competition among and between complementary, different, and equal men and women.