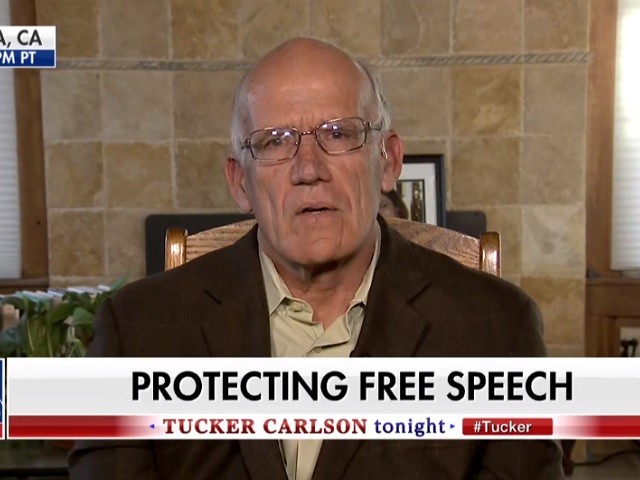 Monday on Fox News Channel’s “Tucker Carlson Tonight,” the Hoover Institution’s Victor Davis Hanson weighed in on the effort to weaponize tragedy through the politicization of tragedy.

At question was the scrutiny of speech, particularly from the right and how it is blamed for the recent string incidents, including a pipe scare aimed at Democrats and media personalities, and the weekend’s synagogue shooting tragedy in Pittsburgh.

Hanson argued the rules weren’t clear and those that are currently attempting to define them, including the so-called “masters of the universe” of Silicon Valley lack the intellect and/or morality to do so.

“[T]he American people think, ‘Well, wait a minute — I don’t like hate speech or tough speech, but I don’t know what the rules are. It’s not symmetrical. It looks like it’s a left-wing electronic ring of terror. These self-appointed Facebook Robespierre in a nanosecond can guillotine you,” Hanson explained. “People don’t like that. So, we’re saying, ‘What are the rules of speech?’”

“From what you and I and others have seen of Facebook and Twitter and YouTube — the masters of the universe in Silicon lack either the intellect or the morality to tell us what is permissible speech,” he continued. “So, we don’t know who to turn to. There is confusion. Maybe we just go back to the ‘Sermon on the Mount’ and just say let’s treat people the way we would like to be treated.”

“I would tell that to Hillary Clinton,” Hanson added. “When Mitt Romney lost in 2012, he didn’t say, ‘I am not going to be civil until the next election.’ When George Bush quite graciously accepted that he was out of office in 2009, he did not go across the country as Obama is now calling the president of the United States an inveterate liar. So, I think it is asymmetrical, and people understand that. Until the adjudicators know they can’t adjudicate us because they don’t have the moral high ground.”