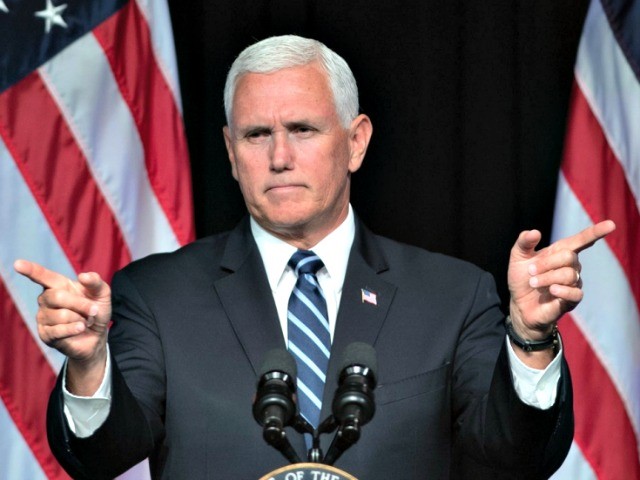 Vice President Mike Pence assured DHS and Coast Guard personnel in Virginia Wednesday that President Donald Trump’s administration will secure the border “one way or another.”

President Trump has repeatedly expressed his willingness and authority to declare a state of emergency in order to build a barrier at the southern border, but has thus far stopped short, with a desire to see Congress do its job.

“We recognize, and I just heard in my briefing, your job is more challenging because our border is not secure along the southern border of the United States,” Pence told the Department of Homeland Security and Coast Guard personnel at Coast Guard Base Portsmouth. “A porous border along the United States gives drug traffickers and criminal cartels too many opportunities.”

Pence pointed to Coast Guard and joint task force interdictions along the “east coast, through the Gulf of Mexico, and along the southern border” as evidence of the trafficking.

“Enforcing our laws and protecting the American people is what all of you do best,” he said, commending the group. The vice president assured those gathered that in line with the president’s State of the Union address Tuesday and the “”determination that he and our administration has reflected,” they will “continue to fight to get you what you need to accomplish that mission.”

“We are going to secure our border one way or another,” Pence stated unequivocally.

The federal government entered a 35-day partial shutdown over late December and January, a fact Pence also touched on during his address. He thanked the group for enduring and serving through it. “The President and I couldn’t more grateful or couldn’t be more proud of all our federal employees and their families who rose to the challenge, stayed on task,” he said.

The Nation saw the character of the @USCG & @DHSgov in high relief when @POTUS took a strong stand for border security during the Government shutdown. They stood tall, stood their watch, they did not relent & they have our thanks for their commitment to their mission & duty. pic.twitter.com/rcmnqOSV31

President Trump set a February 15 deadline for Congress to fund border security and a border barrier before he allows the government to shut down again or declares a national emergency.