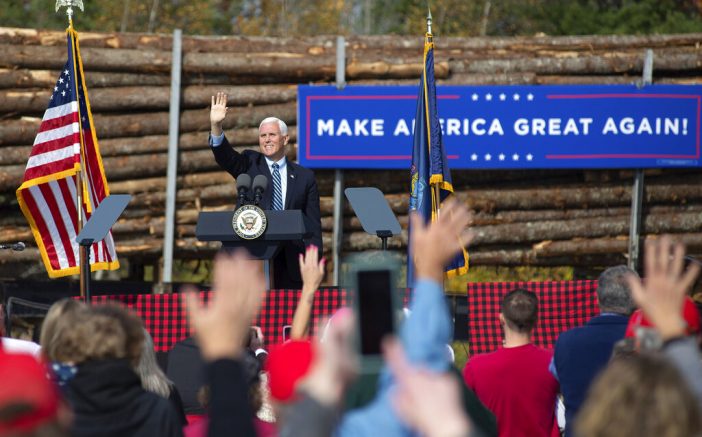 The Trump campaign is pulling out all the stops on the 2020 campaign trial with Vice President Mike Pence reaching out to supporters in Maine and Pennsylvania on Monday.

Pence first made his remarks in Hermon, Maine where he urged voters to go against Democrat presidential nominee Joe Biden in the upcoming election. He slammed Biden for failing to hold China accountable while encouraging the communist country to increase its global influence.

‘For decades, Joe Biden has been a cheerleader for Communist China,” stated the vice president. “He actually said that the rise of China was a positive development for America and he scoffed at the notion that China was even a competitor of our country.

Pence went onto highlight President Trump’s work to rebuild the economy while being able to withstand threats from China. He called the President a “proven job creator.”

“And when Communist China put a 30 percent tariff on Maine lobsters, this President took action,” Pence noted. “We gave Maine’s lobstermen $26 million in aid and we stood up to China to buy more lobsters from Maine and more agricultural good from America.’

The Vice President then traveled to New Cumberland, Pennsylvania to meet with his supporters. He slammed Big Tech companies for their political censorship while vowing to stop them from blocking online content from the public.

“At a time when Big Tech is actually trying to censor what Americans read or see or say, President Trump and I will always fight for the American people’s right to know we’re not going to let Big Tech block the truth,” stated Pence.

He said the Trump administration will stand against this type of political censorship. He then citied how Facebook and Twitter have tried keeping articles about Hunter Biden’s alleged overseas corruption from circulating on their platforms.

With just two weeks until the presidential election, the Trump campaign has continued to reach out to voters across multiple swing states in an effort to show how the President is “making America great again.”