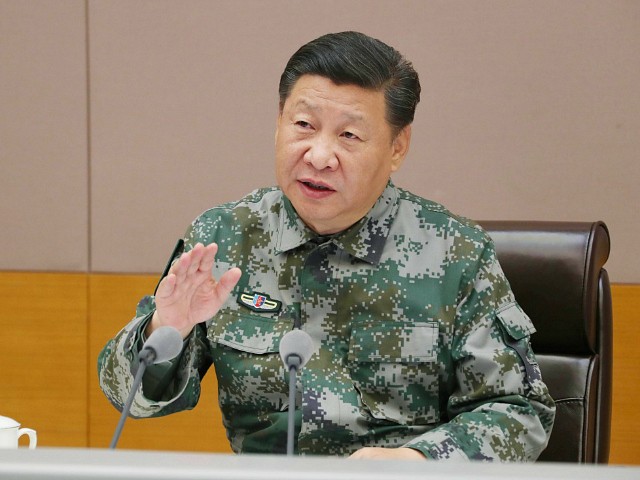 A group of prominent military veterans wrote a letter on Monday urging all American pension funds to refrain from investing in Chinese companies.

“The Chinese Communist Party [CCP] celebrated last week seventy years of its misrule of the people of China,” the authors wrote, referring to China’s recent National Day commemoration. “Increasingly, the CCP’s horrific repression at home is accompanied by growing aggression abroad and threats to the United States of America.”

The signatories said companies that provide Communist China with the means of oppressing its citizens are “enablers” of its terrible conduct. This includes companies that help China maintain its totalitarian “social credit” system, violate U.S. and international sanctions, illegally develop disputed islands in the South China Sea, and improve its military capabilities with advanced weapons.

“Today, such Chinese companies are being underwritten – in many cases unwittingly – by American pension funds and other institutional and individual investors,” the letter noted. “There is at least $6 trillion that investors passively invest in the benchmarked Morgan Stanley Capital International (MSCI) All-Country World Index, which has 6% of its portfolio (shortly going to 7% or another $60 billion) invested in the stocks of Communist China’s corporations.”

“Worse yet, the federal retirement system’s Thrift Savings Plan is set up to mirror this MSCI index starting next year,” the letter continued. “If that happens, U.S. government employees – past and present, military and civilian – risk having their pension funds underwrite the Chinese Communist Party’s malevolent enterprises.”

“It is especially intolerable to those of us who have proudly served the Nation in uniform that our retirement investments will help its enemies threaten our comrades-in-arms and the country we love,” the signatories declared.

“We call on President Trump to prevent the Thrift Savings Plan from being tapped by companies tied to the Chinese Communist Party and thereby ensure that federal retirees will not wind up financing our foes,” they wrote.

The authors of the letter are not alone in asking the Federal Retirement Thrift Investment Board (FRTIB) to refrain from investing in Chinese companies. Sens. Marco Rubio (R-FL) and Jeanne Shaheen (D-NH) published a similar appeal at CNBC on September 30, noting that it would have been “unthinkable” to compel American military personnel and government employees to invest in Soviet companies during the Cold War.

Rubio and Shaheen’s article named several of the companies to which Boykin, McInerney, and their fellow signatories alluded, including surveillance technology firm Hikvision, the Aviation Industry Corporation of China, and telecom corporation ZTE.

“America’s investors should never be a source of wealth funding the Chinese Communist Party at the expense of our nation’s future prosperity,” the senators declared.

Rubio and Shaheen wrote a letter of their own to FRTIB chairman Michael Kennedy in late August, asking him to reverse the decision to invest in Chinese enterprises and explain how that decision was originally reached.

The Trump administration is currently considering restrictions on investment portfolio money flowing into China, prominently including the portfolios of U.S. government retirement funds. The Chinese government has indicated such a move would disrupt trade talks and prompt Beijing to retaliate.