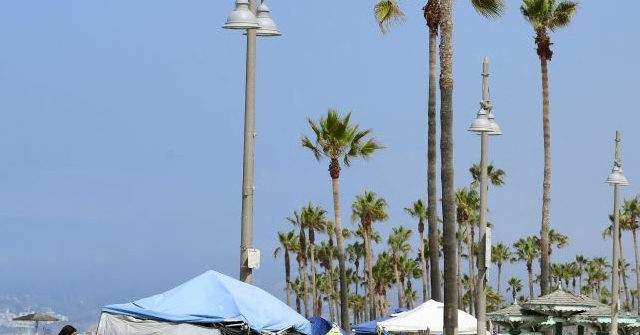 A community association in Venice has warned the city of Los Angeles of potential multimillion-dollar lawsuits if the city continues to not adequately address homeless encampments in the community.

Mark Ryavec, the president of the Venice Beach Association, told KABC that residents are fed-up with the substantial number of homeless people living along the Venice Boardwalk, adding that they often start fires that endanger closeby buildings and homes.

“There’s almost no police presence or fire department presence down here overnight,” Ryavec said. “We’re putting the city on notice, that, if there’s loss of life, if there’s a structure, they are clearly already negligent, and they already will face a huge settlement.”

In January, surveillance footage recorded a man who set ablaze garbage bins on the boardwalk, KABC reports. Authorities say the suspect and another culprit set fire to 15 trash cans, but only one suspect was apprehended, and the other remains at large. The following day, two suspects ignited a cardboard box, ruining a park bench.

In January of 2021, a fire broke out in a homeless person’s tent, which spread to a nearby two-story building, according to KABC. The building was destroyed despite efforts from one hundred firefighters, and now, the owner is suing the city.

Just last month, a baby and her grandmother were allegedly attacked by a homeless woman on the boardwalk when the vagrant demanded the grandmother fork over the baby, Breitbart News reported. The mother of the child and daughter of the grandmother, Katy Gross, says the woman took her mother’s coffee and hurled it in her baby’s face. Thankfully, the beverage was not very hot, and Gross says the woman was arrested.

In August, the city moved 200 people from an encampment on the boardwalk, but shortly after,  tents quickly started popping up in the area again.

The effort was headed L.A. City Councilman Mike Bonin’s office. Venice is situated inside Bonin’s district, and residents have been critical of the councilman. One resident, Dave turner, previously suggested the removal of vagrants from the boardwalk did not do enough to address the issue.

“They cleaned up the immediate boardwalk right here so people can claim victory but there’s people out in the sand, there’s people three blocks away and now it’s repopulating everywhere,” Turner told KABC in January.

Ryavec says there are 70 homeless individuals currently camping on the beach, according to KABC. Police and sanitation remove vagrants from the area every Thursday, but Ryavec says the city needs to do this three times a week to see improvement.

An attorney representing the Venice Stakeholders Association sent a letter to multiple city offices last week, “once again pointing out the dangers, and warning that continuing to ignore the overnight camping problem in Venice could lead to expensive legal payouts,” KABC reports.

“It’s illegal to camp on Venice Beach,” Ryavec said. “And we want that message established by enforcement of the rules that exist.”