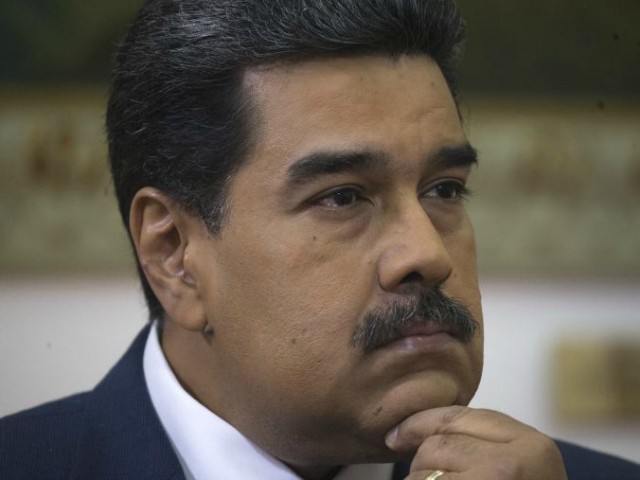 Venezuela’s socialist dictator Nicolás Maduro attempted to send well-wishes to President Donald Trump during his regular Sunday night television broadcast, blaming Trump for testing positive for the Chinese coronavirus and expressing hope that the virus will make him “more human.”

Maduro’s illegitimate regime – his last legal term as president expired in January 2019 – has documented 78,434 cases of Chinese coronavirus and 653 deaths. Few outside observers consider these numbers trustworthy, however, given the deteriorated state of the Venezuelan socialist healthcare system and the Maduro regime’s history of deception in the service of its public image.

In the broadcast in which Maduro addressed Trump’s diagnosis, he also announced new coronavirus measures in the country and the news that his son, socialist official Nicolás Maduro Guerra, had signed up to take an experimental Russian vaccine candidate that President Vladimir Putin had approved despite its not clearing Phase Three clinical trials.

“We do not wish for any human to be infected,” Maduro said during his broadcast, referring to Trump’s diagnosis. “We send our human solidarity. We hope he recovers his health and his life.”

“Hopefully all this will lead him to be more reflexive and more human for the protection of the people of the U.S. and for him to understand the peoples of the world,” Maduro added. “We express that we accompany at this moment the people of the United States and President Donald Trump, and we hope for a speedy and effective recovery.”

Elsewhere in the broadcast, Maduro claimed Trump had “underestimated the use of masks,” despite multiple public appearances wearing them.

Maduro and Trump have for years endured a frayed, at best, relationship. As Maduro is both responsible for crimes against humanity, according to the United Nations, against his citizens and illegitimately holding on to power, Trump has vocally opposed his regime. The Trump administration, like most of the free world, recognized Juan Guaidó as the legal president of Venezuela. The nation’s legislature, the National Assembly, used its constitutional power to appoint Guaidó interim president, with a mandate to organize elections, following the end of Maduro’s last legal term in 2019.

Maduro, in turn, routinely refers to Trump as a “fascist” and has accused him, as he had President Barack Obama before, of organizing “coup” attempts against him.

Maduro joins a long list of adversarial leaders nonetheless wishing Trump well following confirmation that he had contracted the Chinese coronavirus. First among them was President Emmerson Mnangagwa of Zimbabwe, a socialist dictator whose party, the ruling Zanu-PF, has referred to the U.S. ambassador in Harare as a “thug” and blamed Washington almost exclusively, not decades of failed socialist policies, for its collapsed economy.

“My best wishes to President Trump @realdonaldtrump and the First Lady @FLOTUS as they make a full recovery from COVID-19,” Mnangagwa wrote on Twitter.

Joining the Zimbabwean president later last week was North Korean dictator Kim Jong-un, who, according to the state-run Korean Central News Agency (KCNA), “offered his sympathy to the president and the first lady. He sincerely hoped that they would be recovered as soon as possible. He hoped they will surely overcome it. He sent warm greetings to them.”

Chinese dictator Xi Jinping also issued a public message hoping Trump and the first lady would have a “speedy recovery” from the virus, which originated in China and spread globally, thanks in large part, experts have concluded, to the Communist Party’s attempts to hide the initial outbreak of disease.

Elsewhere in his remarks on Sunday, Maduro announced he will impose new measures to contain the Chinese coronavirus in the country, what he called a “7+7 flexibilization plan.” Starting on Monday, the government will allow businesses and other public places to open but only for seven days at a time. The regime will then force them to close for seven days.

Maduro insisted the “7+7” plan is necessary for Venezuelans to no longer be under coronavirus restrictions by Christmas Eve, which Maduro has almost completely co-opted as a socialist holiday. The Maduro regime has published socialist “Christmas carols” celebrating dead dictator Hugo Chávez and debuted products such as “Socialist Barbie” to generate public goodwill and distract from chronic food and other essential good shortages.

“My son has told me his decision to join volunteers for the Russian vaccine,” Maduro said.

Maduro has agreed to offer Russia 2,000 volunteers to take the vaccine candidate and allow Russian scientists to study its effects.