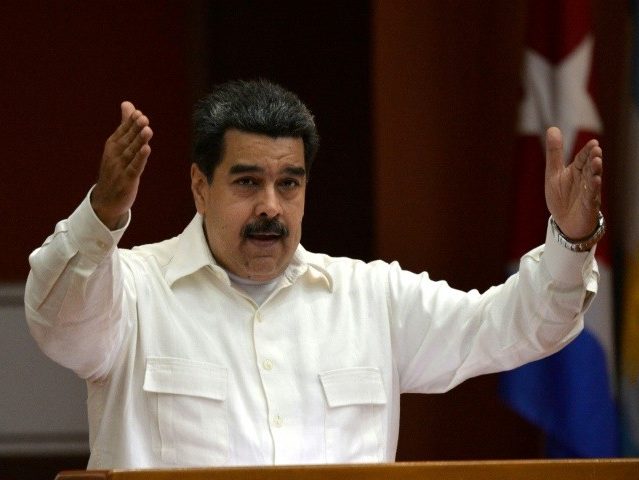 Venezuelan dictator Nicolás Maduro said on Tuesday that he may skip his planned trip to the United Nations General Assembly in New York next week over fears that an unspecified “they” is trying to kill him.

Maduro claimed that he had planned to attend the assembly to counter what he describes as a “hate campaign” against his regime. However, he now fears that U.S. authorities will seek to arrest or kill him and as such is evaluating his decision on grounds of his own security.

“You know they have me in their sights to kill me … I want to go to New York but I have to take care of my security,” Maduro said at a news conference, without elaborating on who might target him. “I’m still evaluating whether to go to the U.N. General Assembly because you know they’re looking to kill me. It’s a permanent conspiracy.”

His claims follow a recent New York Times report revealing that Trump administration officials met with disaffected members of the Venezuelan military planning to launch a coup against Maduro. They eventually decided not to back the group over fears of a lack of planning.

The White House responded to the story by maintaining the need for a “dialogue with all Venezuelans who demonstrate a desire for democracy [to] bring positive change to a country that has suffered so much under Maduro.”

Last month, Maduro was subject to a failed drone assassination attempt during a rally in Caracas, believed to be carried out by opposition operatives working from Colombia.

Maduro has refused to attend the UN General Assembly debate in the past. Last year, Maduro failed to attend, claiming that he was “very busy.” His refusal came shortly after the U.S. imposed sanctions against him and other senior regime officials, as well as broader economic sanctions on the country’s oil industry. Trump had also mulled the possibility of using military force to oust Maduro, although he has decided against it on the advice of his aides and other regional leaders.

Sanctions on Maduro prevent him from traveling to the United States and prevent Americans generally from doing business with him. The United Nations is considered international territory.

In recent weeks, leading advocates of regime change including Sen. Marco Rubio (R-FL) and the head of the Organization of American States Luis Almagro have both indicated that a military solution may be necessary to help end the economic and political crisis in Venezuela that has left millions of people starving and in need of humanitarian assistance. Colombia and Canada have also dropped opposition to the use of military force.

Maduro’s son, “Nicolásito” Maduro Guerra, has previously vowed that his father’s forces will “take the White House” should Trump advocate the use of military force.

“If the United States wants to stain our fatherland soil, the firearms will reach New York and we will take the White House,” Maduro Guerra vowed. “Vietnam would look small. That isn’t what we want. We have never been and will never be a people of war.”