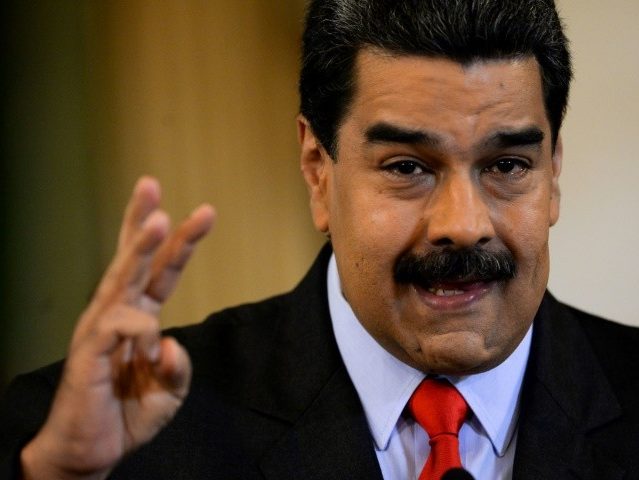 Venezuelan dictator Nicolás Maduro accused President Donald Trump of planning to assassinate him on Thursday, an accusation he commonly hurled at the Obama administration in the past.

In a televised broadcast alongside members of his United Socialist Party of Venezuela (PSUV), Maduro claimed that the Trump administration has asked Colombian President Ivan Duque to help organize his assassination.

“They have given the order from the White House that Maduro be killed, a task they have given to the oligarchy in Bogotá,” he declared. “The government of Bogotá has been given the task of assassinating me, I denounce it worldwide. They will not even touch a single hair of mine.”

“U.S. policy preference for a peaceful, orderly return to democracy in Venezuela remains unchanged,” said a spokesperson for the White House’s National Security Council when asked about Maduro’s comments.

In his speech, Maduro also claimed that Western media was falsely describing his regime as a “dictatorship” to justify international sanctions or even a military intervention.

“[There is] a daily, permanent campaign, in all media, ‘dictatorship, dictatorship,’ to justify the order they have given from the White House,” he declared.

“If they were to do something to Maduro, as they have tried, the working class must use its claws and take to the streets to demand justice, with all the workers’ power [by declaring] an indefinite general strike while launching a national civic-military insurrection to rescue power and punish the coup plotters,” he continued.

Maduro has made similar claims in the past. Most notably, in 2015, the dictator accused then-Vice President Joe Biden of personally plotting his assassination.

“I accuse U.S. Vice President Joe Biden who personally spoke with the presidents and prime ministers about the plan,” Maduro said at the time. “The imperial power has entered a dangerous phase of desperation and has been talking to governments of the continent to announce the toppling my government.”

Maduro provided no evidence for his claims, only that the Trump administration, like most of the free world, opposes his continued illegitimate rule over the country. Washington has made no secret of its opposition to the economic crisis under his leadership, which continues to force thousands of people to flee the country in search of work and humanitarian aid.

Such mass migration is placing extreme pressure on neighboring countries, especially Colombia, whose government recently refused to rule out a military solution to Maduro’s tyranny.

In August, the New York Times reported that the Trump administration had met with members of the Venezuelan military seeking to overthrow Maduro from power, but ultimately decided not to back the operation over fears that it had not been planned thoroughly. The Associated Press revealed in July that Trump personally pressed aides on whether to stage a military intervention in response to Maduro’s degrading of the country’s democratic institutions.

Support for a military solution to the crisis that may involve the arrest or assassination is growing, especially among members of the Venezuelan diaspora. Sen. Marco Rubio (R-FL), who is seen as a key adviser to Trump on the issue, said last month that there was a “very strong argument” for an invasion on the grounds of U.S. national security.