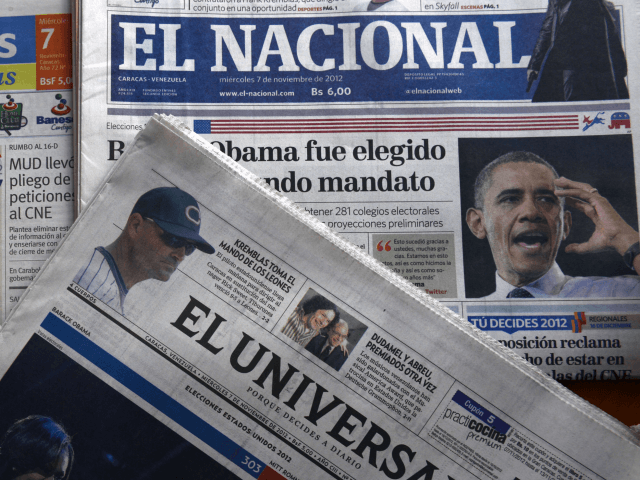 El Nacional, Venezuela’s last remaining nationally circulating newspaper that opposes the socialist Maduro regime, published its last print edition on Friday. The newspaper’s editors explain in the last edition that they no longer have access to enough paper to publish nationwide.

The 75-year-old newspaper stood out among the throngs of pro-government media in the country in the last decade, publishing exclusive reports depicting the gruesome realities of life in Venezuela, from lack of food to the dire state of the nation’s hospitals to the torture of political prisoners. Its regular reporting against the regime triggered a government backlash that included costly legal action and strict rations on ink and paper.

The newspaper will continue to exist in its online format, the editors assured.

In its last print edition, editor-in-chief Miguel Henrique Otero notes that Maduro was not the only leader attempting to silence El Nacional and that the newspaper had survived years of abuse from his predecessor Hugo Chávez. Otero directs the newspaper from exile in Spain.

The last print edition of @ElNacionalWeb is an apt resume of today’s #Venezuela:
– Newspapers shut down
– 10.000 private companies closed in the last 20 years
– Mother denounces his 23yo son’s kidnapping #ThisIsVzla pic.twitter.com/GotEWXfNRB

“They have managed to silence radio and television and make disappear independent print media, turning them into web platforms,” Otero is quoted as saying in an article on the newspaper’s end of circulation. “We were the last national newspaper with a print edition.”

“Harassment of media outlets complete the profile of a pure dictatorship, with no separation of powers or freedom of expression,” Otero said.

Thanks to the socialist regime’s total crackdown on private enterprise, Venezuela no longer produces the paper necessary to print his daily, which means all publishing paper is imported and goes through the government. The Maduro regime rations out that paper to the nation’s newspapers, and who gets enough paper to print depends on who is writing the most favorable content for the government.

In an interview with the Spanish newspaper ABC, Otero noted that these rations had significantly hurt El Nacional‘s ability to print. He also noted that Maduro used colectivos, roving criminal gangs tied to the government, to harass his journalists and attack the newspaper’s headquarters.

Maduro’s henchmen used legal avenues to harass the newspaper, as well. Diosdado Cabello, the head of the illegal socialist legislature and alleged international cocaine trafficker, sued El Nacional for publishing evidence identifying Cabello as the head of the Cartel de los Soles, one of the Western Hemisphere’s most lucrative cocaine trafficking outfits. He won that lawsuit this summer in courts controlled by Maduro, resulting in a fine of one billion bolivares (at the time $500), putting significant financial strain on the newspaper. Cabello sued the Wall Street Journal for the same reporting in U.S. court and lost.

The Cabello lawsuit decision came down shortly after Maduro’s regime launched a criminal investigation against El Nacional for violating the illegal legislature’s “Law of Social Responsibility in Radio, Television, and Electronic Media and the Law Against Hate for Peaceful Coexistence and Tolerance,” which bans criticism of the government. The government accused the newspaper of “disseminating messages in contempt of legitimately constituted authorities and inciting and promoting hate.”

By July, El Nacional‘s staff in the country had dwindled to about 20 people, as many chose to flee the country amid consistent threats of violence. At the time, Otero told Reuters, “we’re going to try to maintain the print edition until the end, even if it’s just a page, because it’s politically symbolic.”

That run ended on Friday. The top headline on this morning’s edition reads, “El Nacional Is a Warrior and Will Keep On Fighting.”

El Nacional published a story online with the byline attributed to anonymous independent journalists ensuring that its journalists’ resistance to the socialist regime would continue.

“It is no secret that throughout its 75 years, El Nacional has always been a window for freedom of expression, which had room for each and every one of the diverse opinions on national and international current events,” the article read. “El Nacional was always a thorn in the side of all governments and government officials because its goal was always to highlight errors committed, denounce corruption, and accompany the Venezuelan people.”

“Despite the tragedy that signifies the end of the print edition of El Nacional for now, the newspaper will reinvent itself and move forward in its digital edition to keep doing what it was born to do: inform truthfully,” the column concludes.