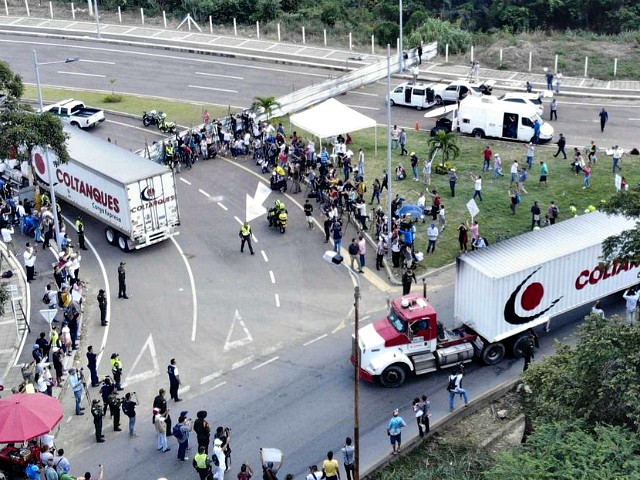 A Venezuelan woman awaiting humanitarian aid from the U.S. told a national outlet Thursday that she witnessed a friend die while waiting for dictator Nicolás Maduro to allow the aid to enter the country.

“Yesterday a friend died because he was paralyzed and had no medication to deal with it,” Dajelys López, an engineer carrying her newborn baby, told news service NTN24 from the border with Cúcuta, Colombia.

This week, the first of three convoys provided by the United States and other regional contributors arrived in Cúcuta ready to distribute aid to starved Venezuelans. The Venezuelan military, still controlled by Maduro, blocked the aid’s passage into the country, meaning only Venezuelans who had made it into Colombia could access it.

The first truckloads of @USAID humanitarian aid are in #Colombia as the US prepositions relief items intended for the people of #Venezuela. At the request of Interim President @jguaido, we are working to deliver to Venezuelans as soon as possible. #EstamosUnidosVE pic.twitter.com/V1Fl7Uittl

On Thursday, Venezuelan authorities placed tankers on the Tienditas international bridge connecting the two countries designed to block the entry of any aid. As a result, those unable to leave the country or reach the border towns remain stranded without any aid whatsoever.

The Venezuelan people desperately need humanitarian aid. The U.S. & other countries are trying to help, but #Venezuela’s military under Maduro’s orders is blocking aid with trucks and shipping tankers. The Maduro regime must LET THE AID REACH THE STARVING PEOPLE. #EstamosUnidosVE pic.twitter.com/L4ysYJaM6H

Part of the Maduro regime’s repeated refusal to accept humanitarian aid stems from their continued denial that the country is experiencing an unprecedented economic crisis, caused by nearly 20 years of socialist governance.

“Venezuela will not be made a false promise of humanitarian aid,” Maduro said in a televised address last weekend. “We are motivated by work, production, and growth of our economy. We are not a country of beggars.”

On Wednesday, Venezuelan President Juan Guaidó, recognized by the majority of the international community, accused the Maduro regime of “directly and indirectly murdering” Venezuelans for the past 20 years and pledged to carry on fighting for the delivery of humanitarian relief to those who most need it.

“We have been working tirelessly with all sectors that will participate in the delivery of aid,” he said in an Instagram video. “They insist on separating Venezuelans from the medicines and food they need to receive.”

The United States sent the shipment of aid in response to a request from Guaidó to send it. While Maduro has yet to vacate the presidential palace and still controls the military, Washington officials stated that, as Maduro is not constitutionally the president, he does not have the authority to undo any requests made by Guaidó.

Guaidó also made his latest appeal to the country’s military, whose loyalty to Maduro remains the principal reason why the opposition is unable to oust him from power.

“We will allow this nation to reconquer its rights and we will enforce it forever,” he continued. “The moment is now, soldiers of the fatherland. Are you going to deny help to your family?”