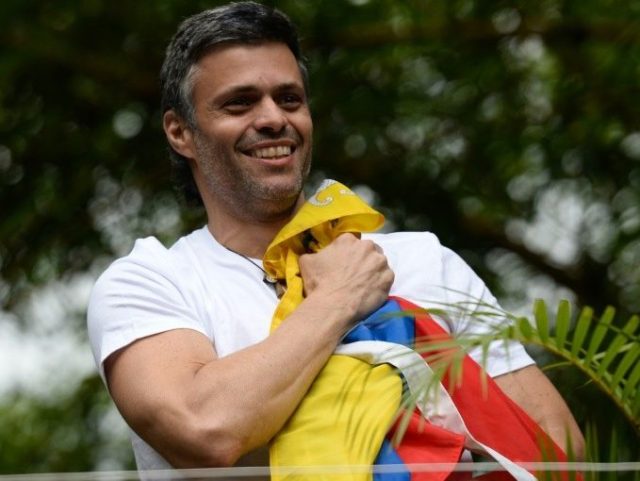 The wife of Venezuelan opposition leader Leopoldo López said in an interview published Tuesday that her husband would consider running for president in any free elections in a post-Maduro era.

Lilian Tintori, herself a prominent anti-Maduro activist, said in an interview with the Spanish newspaper ABC that her husband would “surely” stand as a candidate should free elections take place when the Maduro regime is eventually removed from power.

“First he must be freed, as well as the other 1,135 political prisoners, and qualified to participate. Chávez disqualified him in 2008 and Maduro imprisoned him in 2014,” she said. “If we achieve a free election, Leopoldo will surely make the decision to present himself.”

López remains under house arrest following his imprisonment in 2014 by the Maduro regime for his role in organizing mass anti-government protests. He spent four years of his sentence at the brutal Ramo Verde military prison despite being a civilian and was eventually released into house arrest after months of outcry.

During his house arrest, Tintori stressed that López had “worked hard” with other members Venezuelan opposition to create the “Country Plan,” a progressive manifesto designed to revitalize the country’s economy in a post-Maduro era.

“Since his unjust imprisonment, he has developed a plan together with the best experts in each area to rescue Venezuela,” she said. “He presented it to the National Assembly in December and he is ready to get going.”

Interim President Juan Guaidó remains a close ally of López. Guaidó is a founding member of Popular Will, López’s party. While Guaidó is the nation’s chief executive, Lopez appears to expect to succeed Guaidó as president should the opportunity present itself.

Last year, the New York Times identified López as one of Venezuela’s brightest hopes for the post-Maduro era, noting that his politics “would probably land in the progressive wing of the Democratic Party,” now home to several pro-Maduro lawmakers.

As a result, some sectors of Venezuela’s anti-socialist opposition are concerned that López’s politics are not far enough removed from that of the Maduro regime. Rafael Valera, the communications director of the right-wing Venezuelan campaign group Rumbo Libertad, pointed to Lopez’s various political beliefs as well as his party’s affiliation with the Socialist International.

“A Leopoldo López presidency would represent a continuation of socialist politics in Venezuela,” Valera told Breitbart News. “The party he leads is a member of the Socialist International and advocates various left-wing policies, including a large welfare state, the pardoning and rehabilitation of Chavista criminals, as well as an obsession with the LGBT rights movement.”

Another opposition leader, María Corina Machado, the leader of the center-right Vente Venezuela, has also indicated that she will run for the presidency. In an interview with Fox Business last week, the 51-year-old said she would “absolutely” run if free elections are held, meaning she could become the country’s first female president.