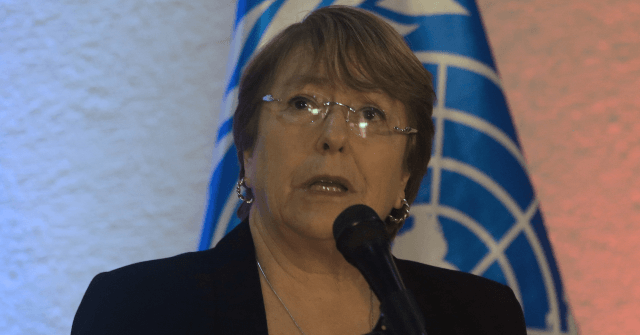 United Nations High Commissioner for Human Rights Michelle Bachelet charged the Maduro regime in Venezuela on Friday with “grave human rights violations,” following the publishing of her report on the country.

In a surprisingly forthright account given the warmth she received from the Maduro regime during her visit there last month, the former socialist president of Chile urged the Maduro regime to “take immediate steps to halt widespread rights violations being perpetrated against the country’s people and work to resolve this all-consuming crisis.”

“During my visit to Venezuela, I was able to hear first-hand the accounts of victims of State violence and their demands for justice,” said Bachelet. “I have faithfully conveyed their voices, and those of civil society, as well as the human rights violations documented in this report, to the relevant authorities.”

In a summary of her report published by the U.N. website, based on interviews with 550 victims and witnesses of abuses, Bachelet identified that the country’s security forces were responsible for “arbitrary detentions, ill-treatment and torture” of anti-government activists. She also noted that allegations of extrajudicial killings were “shockingly high,” with over 5,000 reports of such killings in last year alone.

The report also focused on the country’s worsening economic and humanitarian crisis, noting that “large sections of the population have no access to food distribution” as a result of its “progressive scarcity and unaffordability,” with the country’s monthly minimum wage equivalent to just a few dollars a month. It also reports on the collapse of the country’s health system, which is described as “dire, with hospitals lacking staff, supplies, medicines, and electricity to keep vital machinery running.”

Her findings also note the impact of the regime’s policies on indigenous communities, stating that government mining projects have “resulted in violations of various collective rights, including rights to maintain customs, traditional ways of life, and a spiritual relationship with their land.”

At no point in the report are the terms socialist or socialism mentioned, despite the Maduro regime’s far-left policies being widely understood to be the principal cause behind the current economic meltdown. It also fails to identify the Maduro regime’s removal from power and a consequent transition to democracy as a solution to the country’s woes.

“We should all be able to agree that all Venezuelans deserve a better life, free from fear and with access to adequate food, water, healthcare, housing, and all other basic human needs,” Bachelet concluded. “I call on all those with the power and influence – within Venezuela and elsewhere – to work together, and to make the necessary compromises to resolve this all-consuming crisis. My Office stands ready to continue doing its part.”