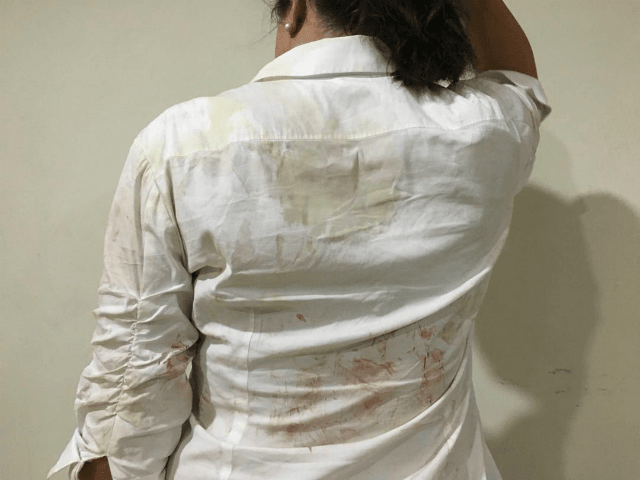 According to Machado and her party, the assailants were a roving gang of supporters of Piar, Bolívar state socialist mayor Yulisbeth García, sent to intimidate the crowd at an anti-socialist rally. Machado’s press team posted video of the attack and images of Machado, clothes stained with what appears to be blood, following the incident.

Machado was violently stripped of her position as a lawmaker in Caracas in 2014, forced out of her office by a government tear gas attack. A year before her expulsion, supporters of the socialist government broke her nose and beat her on the National Assembly floor, in front of then-Speaker of the Assembly Diosdado Cabello.

Cabello reportedly mocked Machado on his television program Con el Mazo Dando (“Hitting with the Mallet”) on Wednesday night, telling his audience that “what was left of her was dangling off.”

According to Machado’s press team, a “horde of pro-government thugs ambushed [us] in Upata with rocks and sticks, attacking, beating, and robbing the group accompanying [Machado].”

They later posted a video of the incident, directly accusing Mayor García’s socialist supporters of attacking them, following by photos of Machado following the attack.

“The violent attackers used rock, sticks, pipes, switchblades, and other objects against those walking pacifically in Upata. They attacked María Corina directly,” the press team wrote.

Vente Venezuela, Machado’s political party, called the assault “brutal” and confirmed that several party members were robbed in the incident.

Machado herself made remarks following the attack and posted them on social media.

Maduro himself has not responded to the incident, though Cabello remarked on it on his program. Cabello lost his position as head of the National Assembly after the opposition won the 2015 legislative elections. In response, Maduro “dissolved” the legislature and built an illegal alternative, the “National Constituent Assembly.” In addition to his television hosting duties, Cabello is the president of the “Constituent Assembly.”

“María Corina, I’m telling you for once, where there are new saints, the old ones don’t perform miracles,” he said on his program, using an idiom to say roughly that the people are not interested in the old democratic ways of the country due to the rise of socialism. “Whatever was left of María Corina was left dangling,” he said of the attack.

In 2013, Cabello personally witnessed an attack against Machado on the floor of the National Assembly, leaving her with a broken nose.

A year later, Maduro’s government abruptly unseated Machado from her legislative position without explanation. When Machado arrived to work on a Tuesday morning in April, her office was surrounded by armed riot soldiers, who sprayed her with tear gas to keep her from entering. After several attacks to her person, Machado instead took to the streets to march for her rights.

Machado has since continued advocating against socialism and demanding an end to the Maduro regime, citing the complete lack of medicine, widespread food shortages, and lavish lifestyles of the socialist elite. The Maduro regime has consistently refused to accept international humanitarian aid, caving this year finally to allow one Chinese medical vessel to treat Venezuelan patients. Maduro’s regime has arrested journalists who attempted to cover the arrival of the Chinese ship, preventing any independent estimate of how much aid the average Venezuelan is receiving from being made.

Following the attack on Wednesday, international supporters of the Venezuelan opposition movement denounced the regime.

“We condemn the attack against María Corina and demand that the Venezuelan dictatorship provide security conditions and cease attacks against her and her team,” Organization of American States (OAS) chief Luis Almagro said in a statement on Twitter.

The U.S. Embassy in Caracas also responded to the attack, with a statement reading, “violence is never the answer.”