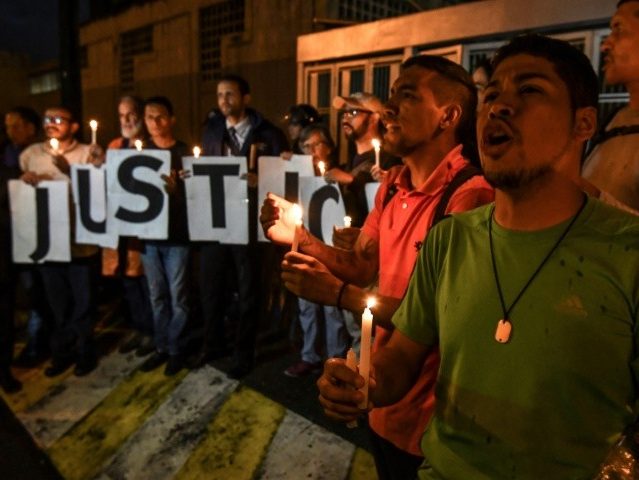 Fernando Albán, a local councilman in Caracas, died in police custody on Monday shortly after returning from New York and taken into custody on Friday.

Albán traveled to New York for meetings during the United Nations General Assembly at the end of September. He dedicated most of his final days to denouncing the Venezuelan socialist regime in public for its human rights violations and gross mismanagement of the economy.

Venezuelan officials reportedly justified his detention claiming they had evidence linking Albán to a failed drone attack on a military event in Caracas in August. Dictator Nicolás Maduro has used that attack, which caused no injuries, to order the arrest of several prominent pro-democracy politicians in the past two months.

Both the government and opposition leaders agree on the fact that Albán was taken into custody by the Sebin on Friday and kept in the capital’s Sebin headquarters, commonly known as “the tomb” for its dark detention and torture chambers. Attorney General Tarek William Saab stated publicly that, on Monday, Albán requested to use a bathroom on the tenth floor of the facility and jumped out of the bathroom window to his death.

“At the moment he was going to be transported to court, while he was in the SEBIN waiting room, he jumped from the window of the building and fell, causing his death,” Reverol claimed on Twitter.

Opposition leaders noted the slight discrepancy and the fact that Reverol’s statement was the first time the government had provided and clear reason for Albán’s arrest. Some have openly accused the government of killing Albán and lying about his final hours.

“I have been speaking with some people within the Attorney General’s office … and Sebin, and the real version of the murder of Fernando Albán is that he was killed in the tomb. He was killed in the Sebin basement,” former Venezuelan presidential candidate Luis Alejandro Ratti told reporters, adding that he was “drugged” and tortured to death.

“They had no mercy with him. They tortured him until they killed him today. They took him to the tenth floor and tossed him out of there,” Ratti said in public remarks on Monday.

Ratti said he could not prove his claims, but that surveillance video of the torture could help and that he hoped individuals within the Sebin would leak that footage.

Albán’s personal secretary also told reporters that, before his arrest, he exhibited no signs of depression or suicidal tendencies and that she was convinced that he was killed.

Julio Borges, one of the main opposition leaders in the country and fellow member of the First Justice opposition party, issued similar statements accusing the government of killing Albán. “There’s no doubt this was an assassination … The only thing left for this government is torture, violence, and destruction,” he told reporters.

The First Justice party issued an official statement asserting “that Councilman Fernando Alban was murdered at the hands of the regime of Nicolas Maduro.” Party officials noted that the government had provided them no further details than what was already public.

Albán’s last post on Twitter before his death was a video of protests in Caracas. “Workers from different guilds are at work inspection stations to protest the violation of collective bargaining contracts. Caracas yells: ‘enough abuse, we demand a response,’” he wrote.

Joining domestic voices calling for an investigation into his death, the United Nations issued a statement on Tuesday demanding the Maduro regime allow a “transparent investigation” into what happened.

“We are concerned about news of his death … We do indeed call for a transparent investigation to clarify the circumstances of his death,” U.N. spokeswoman Ravina Shamdasani said, asserting that Maduro’s regime had “an obligation to ensure his safety, personal integrity and dignity.”

The Catholic Church, through the Archdiocese of Caracas, also demanded a similar investigation.

“We would like the national and international community to be aware that the Caracas Councilman Fernando Albán was a man of solid Christian values and commitment to the poor,” the archdiocese said. “Today’s information leaves us … with reasonable doubts before the alleged suicide theory, uncorroborated by a thorough and objective investigation.”

According to the Venezuelan Penal Forum, an NGO that tracks politically motivated detentions in the country, a total of 12,406 people have been arrested for their political beliefs in Venezuela between 2014 and July 2018. The NGO tallied 248 political prisoners currently in custody as of July, the date of their latest report, but noted that the socialist regime has aduped a “revolving door policy” in which they temporarily detain prisoners, release them, then re-arrest them, replacing them with other political prisoners while they have some time out of custody. This strategy, perfected by the communist regime in Cuba, keeps the number of political prisoners artificially low to avoid international scrutiny.