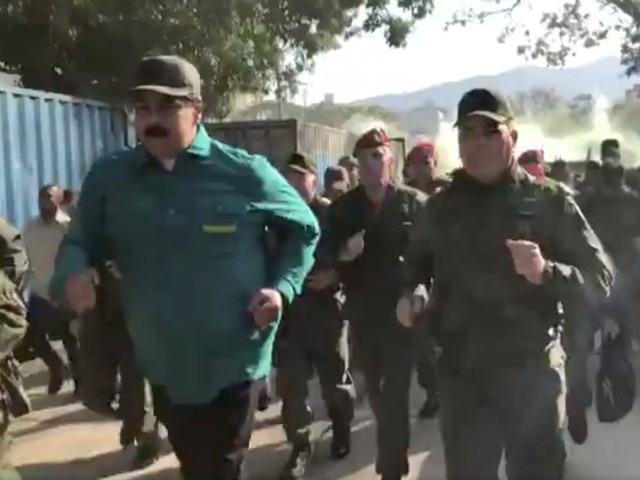 Venezuelan dictator Nicolás Maduro, deposed last week in constitutional action by the country’s National Assembly, published a series of propaganda videos this weekend in which the portly politician appeared to be training with Venezuelan troops, whom he claimed were still loyal to his socialist regime.

Maduro appeared in military fatigues in various videos posted on his Twitter account. In one video, Maduro appears jogging for 17 seconds surrounded by soldiers as loud leftist propaganda music plays in the background.

“Together with … the men and women of our glorious [Bolivarian National Armed Forces], we prepare for the defense of the country,” he wrote:

In another video, Maduro appears on a vessel he calls an “amphibious tank,” appearing to drive it alongside his wife, Cilia Flores. Maduro claimed on Twitter the tank was “patrolling the coast” in case of an invasion, presumably by the United States, which he has consistently accused of plotting a coup against him:

“We are preparing for the most important exercises in our history … their objective is to amass all the capacity – operative, organization, weapons, and civic-military union – to defend our fatherland,” Maduro wrote, posting photos of himself riding in a tank with soldiers:

Maduro ceased being head of state of Venezuela last week after the National Assembly’s opposition leadership invoked Articles 333 and 350 of the Venezuelan Constitution to inaugurate the head of that institution, Juan Guaidó, president of Venezuela. Maduro held fraudulent elections last May in which he blocked opposition candidates from running and used force to intimidate Venezuelans into voting for him, according to observers on the ground. As such, Guaidó contested that Maduro had ruptured the nation’s democratic order; Article 350 requires that the Venezuelan people not recognize a leader who does so and replace him with an interim president.

Maduro has refused to vacate Miraflores, the presidential palace, echoing the situation following the death of Hugo Chávez, when Chávez’s daughters refused to vacate Miraflores for more than a year to allow Maduro to live there. Maduro insists that Guaidó’s invocation of the Constitution is a U.S.-orchestrated coup d’état and that the Venezuelan military remains loyal to him.

“We are in a great battle against the American empire that has pretended that Latin America and the Caribbean is its backyard and that is harming us,” Maduro said in an interview this weekend with leftist propaganda outlet Telesur, which is partially funded by the Maduro regime. “Since I assumed the presidency … I have been the victim of a permanent assault. The worst of all has been the arrival of the government of Donald Trump.”

Guaidó acknowledged this weekend that he does not have control of the military but is urging soldiers to defect to the opposition. During a rally Friday, Guaidó announced that his government would offer amnesty to soldiers who refuse orders from Maduro, no matter the human rights abuses committed during attacks on unarmed protesters.

“Soldiers of Venezuela, please join the side of the people of Venezuela,” he asked. “You will have an important test before you in the next few days. First in front of your family, your loved ones, and God. The second test will be in front of those who need medicine, food, etc. Will you allow humanitarian aid to enter?”

During an interview Thursday, Guaidó went so far as to suggest that he is open to offering Maduro himself amnesty despite running a regime that evidence has revealed has ties to jihadist groups, drug trafficking, and routinely uses torture against political prisoners.

By Sunday, Guaidó told the Washington Post that some soldiers were in discussions with the opposition to abandon Maduro.

“We have been in talks with government officials, civilian and military men,” Guaidó said. “This is a very delicate subject involving personal security. We are meeting with them, but discreetly.”

Guaidó was not prepared to announce anything major regarding the loyalty of the military at the time, however.

Maduro’s state propaganda outlet was busy Sunday contesting Guaidó’s version of events, publishing interviews with high-ranking soldiers who insisted that they remained loyal to the violent socialist experiment. One such soldier, commander Jesús Suárez Chourio, told television host and Hugo Chávez’s brother, Adán Chávez, that “socialism, as a part of life, needs to maintain its legacy with preparation and knowledge of the defense of the fatherland.” Suárez urged civilians to also remain alert against the opposition.