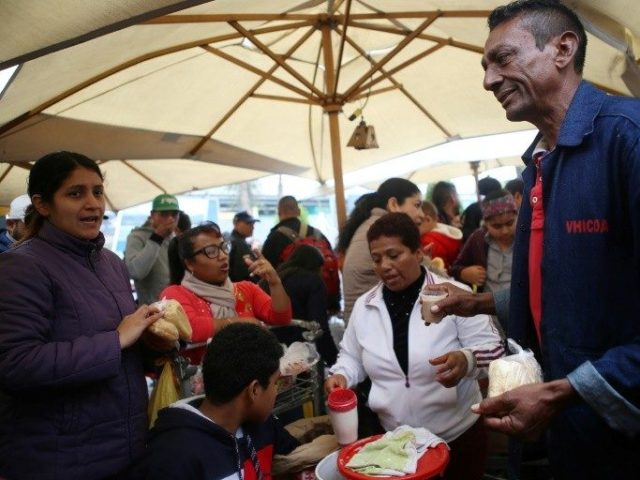 A majority of Venezuelans abstained from the country’s municipal elections on Sunday. Just 28 percent participated in the elections, designed to elect some 2,500 counselors around the country.

The lack of participation follows years of electoral fraud and vote-rigging by the Maduro regime.

The majority of seats went to Maduro’s ruling United Socialist Party of Venezuela (PSUV). As has become typical for Venezuelan elections, those participating complained of being coerced into supporting PSUV through intimidation in the country’s poorest communities, where many rely on the government for access to food and medicine.

Maduro gave a speech on state television soon after casting his ballot where he claimed that Venezuela would win a Guinness World Record for free and fair elections while accusing the U.S. of planning to overthrow his regime.

“Today we are celebrating the 25th election in 20 years, a world record compared to the 10 elections held in the United States and if it were a freedom race, Venezuela would take the Guinness World Record,” he said. “We have a leading democracy in Venezuela, a popular democracy, which is exercised every day with the communal councils and CLAP (Local Committees for Supply and Production).”

“It is already underway, and coordinated directly from the White House, an effort to disrupt the democratic life of Venezuela and to attempt a coup d’état against the constitutional, democratic (and) free regime that exists in our country,” he continued.

Venezuela’s ruling socialists have a long, detailed history of electoral fraud dating back to the early days of Hugo Chávez’s presidency. In May, Maduro was “re-elected” in a presidential election widely dismissed as fraudulent by the United States and other Latin American democracies.

His victory came after anti-socialist opposition candidates were barred from running, while others boycotted the process altogether on the grounds that it would be rigged. Maduro’s only opposition came in the form of Henri Falcón, a former Chavista and ally of Maduro, whose campaign signature became handing out free soup.

As well as widespread electoral fraud, many Venezuelans are boycotting the electoral process due to widespread dissatisfaction over the regime’s socialist policies, which have left the country in the worst economic crisis in its history. Millions of people have now fled the country in recent years, many of whom are in need of humanitarian assistance amid a brutal suppression of wages and chronic lack of living resources such as food, medicine, and electricity.