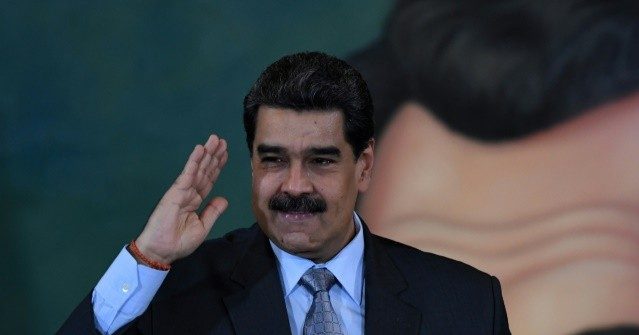 The ambassador of the legitimate government of Venezuela to the United Kingdom and Ireland, Vanessa Neumann, told the Saudi outlet al-Arabiya on Sunday that the Shiite terrorist organization Hezbollah directly participates in the repression of the Venezuelan people.

Neumann is an international affairs expert who had previously identified the man in charge of Venezuela’s vast natural resources under Maduro, Tareck El Aissami, as “one of Hezbollah’s great bagmen.” The American government has sanctioned El Aissami as a known “drug kingpin” and associate of Shiite terrorist organizations.

Neumann told al-Arabiya that not just El Aissami, but Maduro himself has close ties to Hezbollah, a terrorist group directly funded by the Islamist regime in Iran and active in Lebanon, Iraq, and Syria, among other places.

“The Hezbollah presence in Venezuela has been part of the death and suffering of my people. [Hezbollah leader] Hassan Nasrallah is interfering in our politics and giving training to murder, starve, and oppress us,” Neumann told al-Arabiya. “We have hundreds of thousands of children starving and every morning a mother has to decide which of her children she is going to feed because she can’t feed all of them. And Hezbollah is intricately involved in this.”

Neumann said Maduro, who ceased being the legitimate leader of the country in January, “has direct relations with Hezbollah” through his foreign minister, Jorge Arreaza, son-in-law to the late dictator Hugo Chávez. She also described El Aissami, the nation’s minister of “industries and natural production,” as “Hezbollah’s main point of contact” in the country. She specifically accused Hezbollah of trafficking in illegal gold mining, which under Maduro has become both an environmental and humanitarian disaster as competing Marxist gangs fight over gold-rich turf.

“Hezbollah are part of the repressive regime. While they help our oppressors and our murderers, they personally enrich themselves. By helping us purge the Hezbollah influence, it will help us attain the free and democratic Venezuela we are trying to attain,” she said.

Saudi Arabia has, for decades, been Iran’s major geopolitical rival, as the government custodian of the holiest sites in Islam and leader of the Sunni Muslim world. Iran has gone so far as to argue that Riyadh should not control access to Mecca during the Hajj, the mandatory pilgrimage in all Islamic sects.

Saudi Arabia does not support the Maduro regime, but it has not recognized Guaidó as the president of the country. It remains an outlier among Islamic nations for not vocally endorsing Maduro, however, even among the Sunni states.

Maduro claims the nation’s presidency after “winning” the May 2018 presidential election, in which he allowed only other communist candidates and engaged in severe fraud; the opposition also boycotted the election, leading to a record-low turnout government leaders insist does not represent the true will of the Venezuelan people. The Venezuelan constitution allows the National Assembly to appoint a president when the current president engages in a “rupture of the democratic order,” which the lawmaking body did in January, appointing its leader, Guaidó. Guaidó has failed to use his presidential powers, however, because the Venezuelan armed forces refuse to recognize him as commander in chief, in part because they function as a drug trafficking syndicate for Maduro and his cronies.

The socialist regime’s ties to Hezbollah harken back to the days of Hugo Chávez, who enjoyed a warm relationship with former Iranian president Mahmoud Ahmadinejad. Under Maduro, however, with El Aissami at his side, those ties have strengthened significantly. The “Panama Papers,” a prodigious document dump that exposed global corruption in 2016, revealed that the communist regime in Cuba helped Venezuela fund the issuance of thousands of authentic Venezuelan passports to Middle Eastern individuals with no ties to the country, most of them of Shiite background and many with ties to Hezbollah. Those passports, more powerful than Syrian or Iranian ones, could help potential Hezbollah members enter the Western Hemisphere with minimal suspicion.

In conversation with Breitbart News last year, Neumann explained that El Aissami “is one of Hezbollah’s great bagmen, a sort of huge funder, and the money goes through the networks, and then, as you say, that money comes back through investments.”

El Aissami is under U.S. sanctions. In August, U.S. Immigration and Customs Enforcement (ICE) issued an alert for El Aissami, asking in a post on social media, “Have you seen this most wanted fugitive”:

“He facilitated shipments of narcotics from Venezuela, to include control over planes that left from a Venezuelan air base and drug routes through the ports in Venezuela,” ICE stated in its “most wanted” profile. “In his previous positions, he oversaw or partially owned narcotics shipments of more than 1,000 kilograms from Venezuela on multiple occasions, including those with the final destinations of Mexico and the United States.”

Maduro most recently met with the president of Iran, Hassan Rouhani, in October. In that meeting, at a summit in Baku, Azerbaijan, Rouhani applauded Maduro for maintaining his firm anti-American stance.

“The Americans have failed in any plots and goals they have followed in our region, from Iraq and Syria to Palestine, Afghanistan and Yemen, and all their conspiracies against us have failed,” Rouhani said. “Iran and Venezuela have always supported each other in all international and political communities and will continue to do so.”