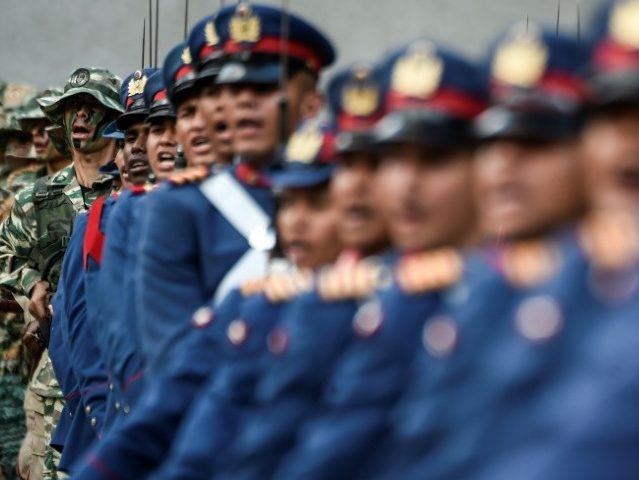 Senior Venezuelan socialist official Diosdado Cabello claimed in an interview Sunday his country is “fully prepared” for a war with the United States.

Cabello, the leader of the regime’s illegal lawmaking body and a close ally of dictator Nicolás Maduro, claimed that the country’s Bolivarian National Armed Forces would remain loyal to Hugo Chávez’s socialist revolution should the U.S. or any other power try to topple the regime.

“The United States offers our military amnesty. If you rise up against Maduro, you will be forgiven. As if the military had something to be forgiven for. Is it wrong to love our country? To defend it?” he continued. “Our Armed Forces, I believe, are prepared to resist those attacks of the North American imperialism and of the European Union, because they have a great conscience.”

There is little evidence to support Cabello’s claims. Instead, countless reports detail the growing disaffection and dropout rates among troops, many whose salaries fail to cover basic living resources such as food and medicine. Some soldiers have tried to launch low-level coups and rebellions, although such efforts have so far proved unsuccessful.

Cabello’s comments come amid growing international pressure for more action to be taken against the Maduro regime, currently presiding over the worst economic crisis in the country’s history. Thousands of people are now fleeing the country every day in need of humanitarian assistance, while many political dissidents have also fled the country in fear of their freedom and lives.

Leading figures who have called on Trump and other Latin American countries to consider a military solution to the crisis include Sen. Marco Rubio (R-FL), the Head of the Organization of American State Luis Almagro, and Venezuela’s former Ambassador to the United Nations Diego Arria.

A desire for an intervention has also grown among members of the Venezuelan diaspora desperate to return to their homeland, although such a prospect still remains unlikely. Last August, President Donald Trump reportedly weighed the option of a military solution to the crisis, but ultimately decided against the idea, instead choosing to impose economic sanctions in a bid to squeeze the regime.

Cabello’s warning is unlikely to instill fear among leaders in Washington. Trump previously mocked the Venezuelan military for their seemingly cowardly response to a failed assassination attempt on Maduro.

“You saw how the military spread as soon as they heard a bomb go off way above their head,” Trump said of the attack in August. “That military was running for cover. That’s not good. I don’t think the Marines would have run.”

Last year, the government ordered civilians to join in “civic-military exercises” to prepare for a potential U.S. invasion, which included exercises such as swinging on ropes, running through tires, and crawling in sand holding weapons. Maduro later claimed that “at least” one million people participated.