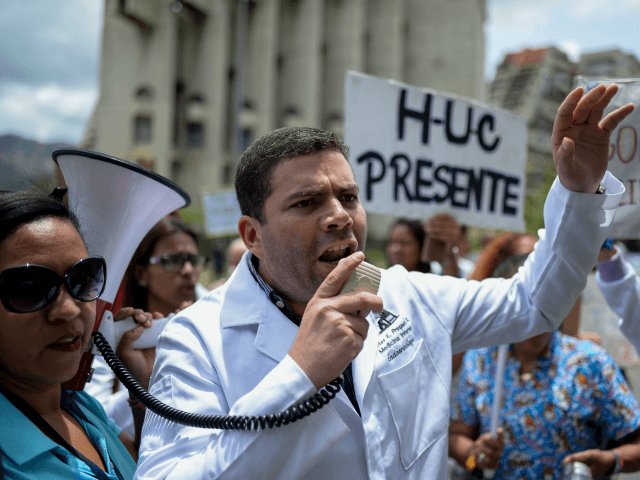 Nicolás Maduro’s socialist regime in Venezuela arrested nurses and doctors across the country for repeatedly protesting the lack of medicine and essential resources required for them to treat their patients.

According to the Venezuelan outlet RunRunes, the first case took place the Luis Razetti hospital in Barcelona, Anzoátegui state, where the Scientific, Criminal and Criminal Investigations Body (CICPC) detained two nurses in charge of the neonatology department on charges of stealing hospital supplies.

“They were taken for questioning because they found a box with two physiological solutions, 20 and 10 cc injectors, intravenous catheters, nasogastric aspiration probes, nebulizing mask, micro drippers, and May cannula,” said the hospital’s deputy director. “Everything needed for a newborn child.”

On Sunday, healthcare workers gathered in front of the Barcelona Court, where the nurses were presented, to express their rejection of the detention. Elected lawmaker Delsa Solórzano joined the health guild’s request, posting on her Twitter account, where she demanded the “full and immediate freedom for the three Anzoátegui nurses arbitrarily detained by the dictatorship.”

Another case involved the pneumonologist and criminal lawyer Maryori Medina Parra. The 63-year-old was reportedly was detained by agents of the DGCIM on Saturday when she was at her home in Puerto Ordaz, Bolívar state. According to reports, 20 secret service agents broke into her apartment, where they confiscated her car and laptop. The reason for her arrest is still unknown.

The arrests suggest that the Maduro regime may be cracking down on another institution that is in dire need of extra resources and personnel. Many hospitals are now severely understaffed and there are chronic shortages of necessary medical supplies that have led to many patients being left untreated and dying as a result.

Many medical professionals have taken to the streets to protest their meager salaries and lack of vital resources, although there appears to be no obvious solution given how the regime is effectively bankrupt and refuses international humanitarian aid. Universal healthcare was a central tenant of Hugo Chávez’s socialist revolution; the country now has some of the worst health outcomes in the world and has seen the return of infectious diseases such as polio.

The total collapse of the country’s healthcare system remains one of the principal factors behind the country’s outward migration crisis. Thousands of people flee the country every day in desperate need of humanitarian assistance, much of which is provided for by charities and foreign governments seeking to ease the pressure of the crisis.