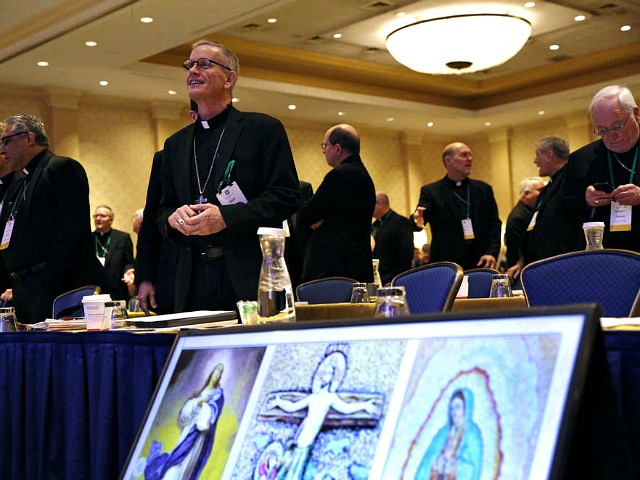 The former papal nuncio to the United States has written to the U.S. bishops gathered in Baltimore, telling them to be courageous in dealing with clerical sex abuse, after Pope Francis ordered them not to vote on new measures.

“I am writing to remind you of the sacred mandate you were given on the day of your episcopal ordination: to lead the flock to Christ,” wrote Archbishop Carlo Maria Viganò Tuesday. “Meditate on Proverbs 9:10: The fear of the Lord is the beginning of wisdom!”

The archbishop — who released an 11-page bombshell report in late August accusing the pope of rehabilitating serial homosexual abuser Cardinal Theodore McCarrick despite knowing of his crimes — told the bishops not to behave “like frightened sheep” but rather “as courageous shepherds.”

While not directly proposing that the bishops disobey the pope’s order to hold back on measures aimed at addressing sex abuse, he does suggest that they do the right thing by victims as well as for their own salvation.

“Do not be afraid of standing up and doing the right thing for the victims, for the faithful and for your own salvation. The Lord will render to every one of us according to our actions and omissions,” Viganò wrote, while also assuring the bishops that he is fasting and praying for them.

The pope has refused to confirm or deny the allegations made in Viganò’s original report, including the question of when he learned of McCarrick’s reported history of abuse.

Pope Francis called out the former nuncio, comparing him to Satan. Days later, the pope said that pastors accused of misconduct are like Jesus on Good Friday, who responded with silence to the accusations brought against him.

On Monday morning, Cardinal Daniel DiNardo, the president of the bishops’ conference (USCCB), informed the assembly that he had been contacted by the Holy See on Sunday afternoon with instructions not to go forward with a vote on several concrete measures to respond to the abuse crisis.

The Vatican told the U.S. bishops to wait for a plenary meeting in Rome on the sex abuse issue to be held with Pope Francis in February together with the presidents of other national bishops’ conferences from around the world.

The bishops had intended to make dealing with the sex abuse crisis the focus of their annual fall meeting.

On announcing the news, Cardinal DiNardo expressed his “disappointment” with the decision.

“At the insistence of the Holy See, we will not be voting on the two action items in our docket regarding the abuse crisis,” DiNardo said Monday.

“We are not, ourselves, happy about this,” DiNardo said during a press conference. “We have been working hard to get to the action stage, and we’ll do it, but we have to get past this bump in the road.”

Ever since mid-August, DiNardo has been insisting that the Vatican initiate a formal investigation into the case of Cardinal Theodore McCarrick’s abuse, a request that was ultimately denied after DiNardo traveled to Rome to present his petition to Pope Francis.

The measures proposed by the USCCB included a code of conduct for bishops, the creation of a lay commission to address the abuse issue as well as the McCarrick case, the establishment of a third-party hotline to report bishops accused of abuse or mishandling of abuse cases, and “protocols for bishops resigned or removed because of abuse.”

Pope Francis had initially suggested that the bishops suspend their fall meeting altogether, replacing it with a weeklong silent prayer retreat, but the bishops opted to have the meeting anyway but included days reserved for prayer as well.

In explaining the pope’s decision to suspend action by the bishops, the Vatican ambassador to the United States, Archbishop Christophe Pierre, said that Francis is concerned about “communion,” wanting the whole Church to move together rather than having national bishops’ conferences make their own policies.