The Vatican has unveiled this year’s Nativity scene in Saint Peter’s Square, which this year has been sculpted in 720 tons of sand.

The golden sand for the massive sculpture was brought south from the Dolomite mountains and conveyed into the Vatican on 21 heavy trucks for its unveiling this weekend.

On Friday, Pope Francis addressed the delegations from groups that had created the sand sculpture and donated the 65-foot-tall red spruce tree, which was also lit during the ceremony.

“I thank all those who cooperated in bringing about these Christmas symbols, especially the four sculptors, from different countries, who carved the crib,” Francis told them, while also thanking the technicians and staff of the Vatican City State. 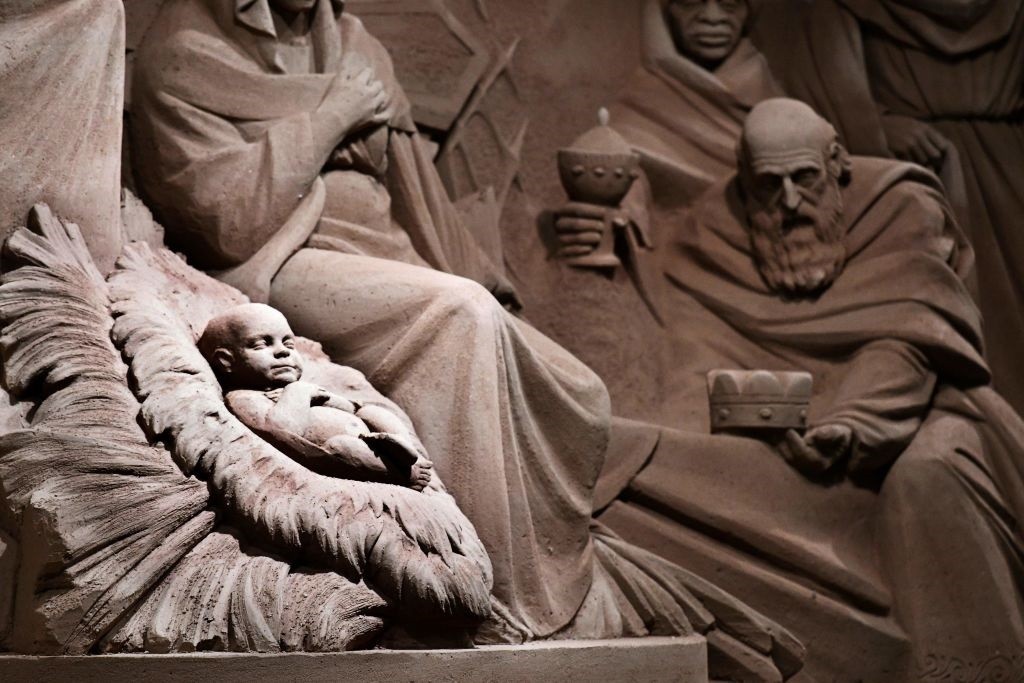 People look at the sand nativity crib after it was unveiled in St.Peter’s square at the Vatican City, on December 7, 2018. – A huge life-size crib carved into the sand and a fir tree from the Italian region of Friuli (north) were inaugurated on December 7, 2018 in St. Peter’s Square, less than three weeks before Christmas. (Photo by Vincenzo PINTO / AFP) (Photo credit should read VINCENZO PINTO/AFP/Getty Images)

“The tree and the crib are two signs that never cease to fascinate us; they tell us about Christmas and help us to contemplate the mystery of God made man to be close to each one of us,” he said. “The Christmas tree with its lights reminds us that Jesus is the light of the world, it is the light of the soul that drives away the darkness of enmities and makes room for forgiveness.”

The towering spruce tree came from Italy’s Cansiglio forest, the pope recalled, and “symbolizes God that with the birth of his Son Jesus has lowered himself down to man in order to raise man to himself from the fogs of selfishness and sin.”

The creche scene, on the other hand, is made of Jesolan sand, which as a poor material, “recalls the simplicity, smallness, and frailty with which God revealed himself with the birth of Jesus in the precariousness of Bethlehem,” the pope said.

“The child Jesus, Son of God and our Savior, whom we place in the manger, is holy in poverty, smallness, simplicity, and humility,” he said.

The pope expressed his wish that the manger and the Christmas tree might help families to reflect on the luminosity and tenderness of God and “help everyone to live the feast of the birth of Jesus.”

“Contemplating the Child God who emanates light in the humility of the nativity scene, we can also become witnesses of humility, tenderness and goodness,” he said.

The sand Nativity Scene has a tradition in Jesolo since 2002, according to the Patriarch of Venice, Archbishop Francesco Moraglia.

“The mystery takes shape in the ephemeral sand, which is the earth,” Moraglia said, noting that it represents “fragility, precariousness, because man is like a field flower, which blooms in the morning and is already wilted by evening.”

Speaking to the crowd gathered in the square for the tree-lighting ceremony, the archbishop said that “the Nativity represents the event that changed the world, which was brought about and continues to live in our faith. God makes it so that we humans can be saved and are able to save others.”