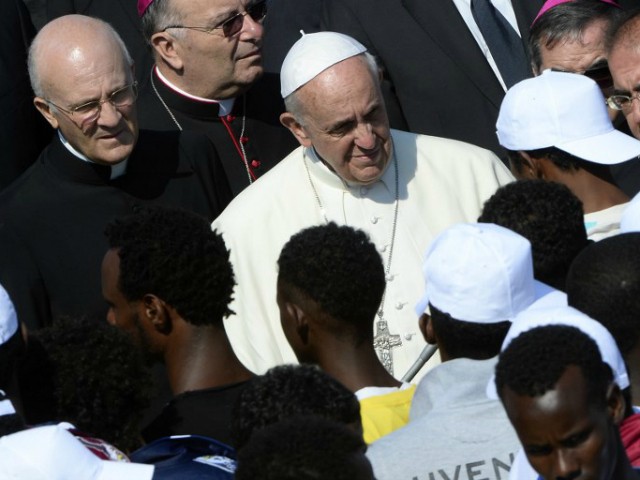 The Vatican kicked off a two-day conference against “xenophobia, racism, and populist nationalism” Tuesday as part of a push for greater openness to global migration.

The Rev. Dr. Olav Fykse Tveit, General Secretary of the World Council of Churches (WCC), opened the conference titled the “World Conference on Xenophobia, Racism, and Populist Nationalism in the Context of Global Migration and Refugees” by condemning the “destructive forces” of populism and nationalism.

“We will not allow the divisive forces of xenophobia, racism, and nationalist populism to prevail, but are ready to struggle for the consciousness of all people affected by them,” Tveit said.

The Vatican’s representative, Monsignor Bruno-Marie Duffé, Secretary of the Dicastery for Promoting Integral Human Development, agreed that populism and nationalism are an enemy that must be defeated.

“Populism is the political exploitation of collective fears: its announces a future for some with the exclusion of others. Our Christian hope is addressed to everyone no one excluded,” Monsignor Duffé said.

Duffé was particularly critical of efforts to curb illegal immigration out of a concern for national security, such as those undertaken by Italy’s populist government.

“How can we welcome and protect migrant people when a relevant number of citizens –including our brothers and sisters in the faith – close their doors to migrants because they believe that the latter ‘destabilize’ their society, nation or community?” he said.

“We are gathered here for a very significant reason, a demanding task, a call from God coming to us through many migrants today,” Rev. Tveit said. “Many of the find themselves to be excluded from the future of security and hope all human beings share.”

The WCC partnered with the Vatican’s department for promoting integral human development and the Pontifical Council for Christian Unity in organizing the conference, which is being held in the Vatican behind closed doors.

“Together we are addressing fear of the other, the expressions of that fear, the political use or abuse of fear, and the cynical profit from the fear of refugees and migrants,” said Rev. Tveit, who is a Norwegian Lutheran theologian.

Churches are called to confront together “the destructive forces of fear, of xenophobia, racism, and populist, exclusive nationalism,” he said.

“The love of Christ requires us not to succumb to racism but to resist exclusion based on fear, the fear that fuels xenophobia and exclusive nationalism,” he said.

Now is the moment for churches to take a decisive step to develop our cooperation solidly in aid of migrants and refugees, Tveit said. “We see that together we can contribute to heal and reconcile societies deeply divided in their reaction to foreigners and strangers, to the poor and marginalized in their midst.”

Rev. Tveit said it is the responsibility of the churches to “help millions of migrants and refugees to secure their safety and to integrate them into new homes” and at the same time to “heal societies that are deeply divided by xenophobia, racism and hatred.”