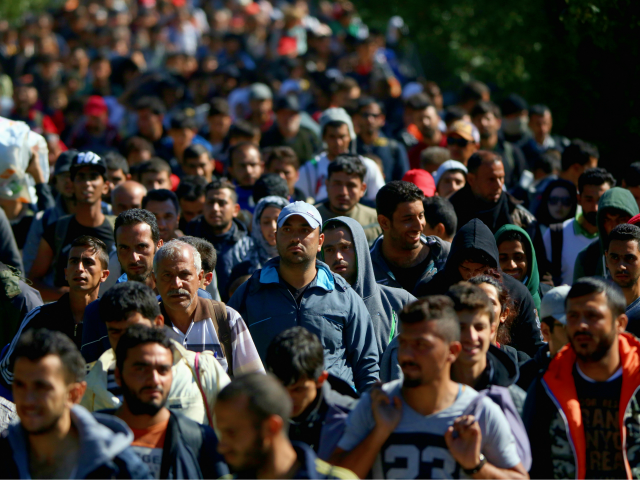 In the Vatican’s first intervention in the U.N. conference on migration in Marrakesh, Morocco, Cardinal Pietro Parolin reiterated the Vatican position that international migration must be governed globally rather than by individual nations.

Implementation of the U.N. global compact “will help all Governments, as well as non-governmental entities, including faith-based organizations, collectively to manage migration in a more safe, orderly and regular manner, something no State can achieve alone,” Cardinal Parolin said.

In his address, the cardinal said that all migrants share the same human rights, “regardless of their status,” a shot across the bow for nations that insist on the difference between legal and illegal immigration.

The Vatican representative also underscored what he sees as the forced nature of much contemporary migration, as opposed to voluntary migration undertaken to better one’s circumstances or take advantage of social welfare programs and job opportunities not found in one’s homeland.

The adoption of the Global Compact on Migration “comes at a critical moment in history,” the cardinal said. “Migration has always been a natural response to crises and to the innate desire for greater opportunities, for a fuller life with greater freedom, peace and security. More people are on the move than ever before.”

Parolin added that “ever more people are being constrained by adverse factors to leave their homes,” which often leads “to involuntary, unsafe, and irregular journeys that place migrants and their families in vulnerable situations, presenting significant challenges for countries of origin, transit, and destination.

“Conflicts, wars, climate change, extreme poverty and its train of miseries will inevitably compel many people into unsafe, disorderly and irregular migration, making it not a choice but an act of desperation,” he insisted.

Cardinal Parolin went on to underscore the central place that immigration has occupied during the Francis pontificate.

“Pope Francis has dedicated much of his pontificate to raising awareness about the plight of migrants, as well as the moral urgency to care for those who have been displaced and to respond to the root causes of their displacement,” he said.

“He has also underlined that a dignified response to migration must be reasonable, with Governments prudently determining their actual capacity for meaningful integration,” he said.

With a tacit nod toward the United States, Parolin said that we “must give preference to policies that favour family reunification and prevent their separation throughout the migration process, while working towards ending the practice of detention, particularly of minors.”

The cardinal also raised the specter of “xenophobia” as the root cause of much resistance to migration, an explanation that the Vatican has had recourse to on several occasions.

This fall, the Vatican co-hosted a meeting on “migration, xenophobia, and politically motivated populism” together with the World Council of Churches (WCC), which criticized the rise of populist movements that oppose mass migration.

The current leader of the WCC, Rev. Olav Fykse Tveit, said the meeting would be a “very useful and significant workshop to dig a bit deeper” into the problems of xenophobia as an expression of populism, as well as its links to racism, conflict, and violence in countries around the world.