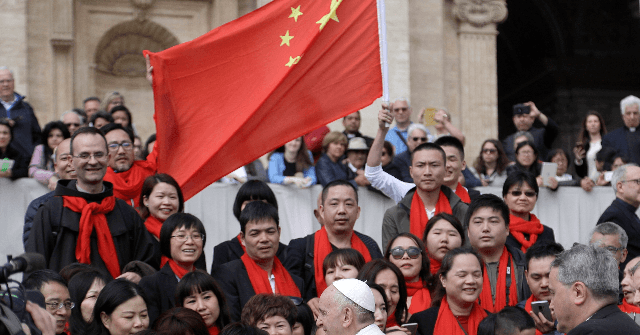 ROME — Vatican Archbishop Claudio Maria Celli said on Italian television this week that a secret agreement with Beijing on the appointment of bishops is likely to be renewed this coming year.

The controversial deal between the Holy See and the Chinese Communist Party (CCP) involved the Vatican ceding an unspecified amount of authority for the appointment of Catholic bishops in the country.

Archbishop Claudio Maria Celli, the head of the delegation in relations with the Chinese government, appeared this week on the Italian television program Stanze Vaticane and said that he believes the Vatican will renew the accord, which is due to expire this fall.

“Dialogue with China is not an easy path but we have embarked on a path made of respect, attention, and mutual understanding to resolve the knots that remain and the situations that leave us more than thoughtful, I would say worried,” said the archbishop.

“I think we will probably have to reconfirm it for another 1-2 years, but still the Holy See has not made a decision on this matter which will then be communicated to the Chinese authorities,” he said. “However, the climate is positive, and there is an atmosphere of respect, clarity, co-responsibility, and foresight.”

“We try to look to the future and try to give the future of our relationships a deep, respectful basis and I would say that we are working in this direction,” he said.

“It is undeniable that there are situations and events that require a path that will not be easy. But the Holy See wants to continue on this path, it wants to go ahead and reach a normality from which the Chinese Catholics can express all their fidelity to the Gospel and also respect for his Chinese identity. The Catholic Church in China must be fully Chinese but fully Catholic!”

Many critics of the agreement have argued that the accord has made religious freedom in China worse, and the CCP has used it as cover for intensifying its persecution of Christians.

Last January, the bipartisan Congressional-Executive Commission on China (CECC) released its annual report on human rights conditions and rule of law developments in China, finding an overall deterioration of religious liberty in China over the year 2019.

“In September 2018, the Chinese Ministry of Foreign Affairs signed an agreement with the Holy See, paving the way for the unification of state-sanctioned and underground Catholic communities,” the report stated. “Subsequently, local Chinese authorities subjected Catholic believers in China to increased persecution by demolishing churches, removing crosses, and continuing to detain underground clergy.”

“The Party-led Catholic national religious organizations also published a plan to ‘sinicize’ Catholicism in China,” the report continued, referring to the stated aim of the Chinese Communist Party (CCP) of forcing all religions to conform their teachings and practices to the party line.

Chinese Communist Party General Secretary Xi Jinping has doubled down on the “sinicization” of religion, the report’s executive summary noted. “Scholars and international rights groups have described religious persecution in China over the last year to be of an intensity not seen since the Cultural Revolution,” it added.

While a representative of the Holy See stated that the aim of the agreement was “for Chinese Catholic believers to have bishops recognized by both the Holy See and Chinese authorities,” the report said that “observers noted that the Chinese government was likely seeking to increase its control over the underground community.”

Beijing has cracked down on the underground church ever since the Holy See softened its position on the state-controlled Catholic Patriotic Association, allowing believers to join despite its assertion of total independence from Rome.

“Although the terms of the agreement were not made public, a source familiar with the negotiations stated that the agreement gave the Chinese government the authority to nominate bishops, which the Pope would retain the right to veto,” the report continued. “The Holy See also recognized seven formerly excommunicated official bishops as part of the deal, having already asked two underground bishops to give up their positions to make way for two of these state-sanctioned bishops.”

The report concluded that the situation of Catholics in China is now worse than it was before the Vatican signed its 2018 accord with the CCP.

“Observers and Catholic believers expressed concern that the agreement did not provide sufficient support for the Chinese Catholic community, with one scholar pointing out that the authorities’ persecution of both underground and official Catholic communities has actually intensified over the last year under the ‘sinicization’ campaign,” it said.

The pope himself has tried to assuage the fears of Chinese Catholics and others concerned about the concession of too much authority to the communist party in the internal affairs of the Church and wrote a letter to China’s Catholics in 2018 saying that he understood their worries while urging them to trust him.

Francis said he is convinced that “encounter can be authentic and fruitful only if it occurs through the practice of dialogue, which involves coming to know one another, to respect one another and to ‘walk together’ for the sake of building a common future of sublime harmony.”