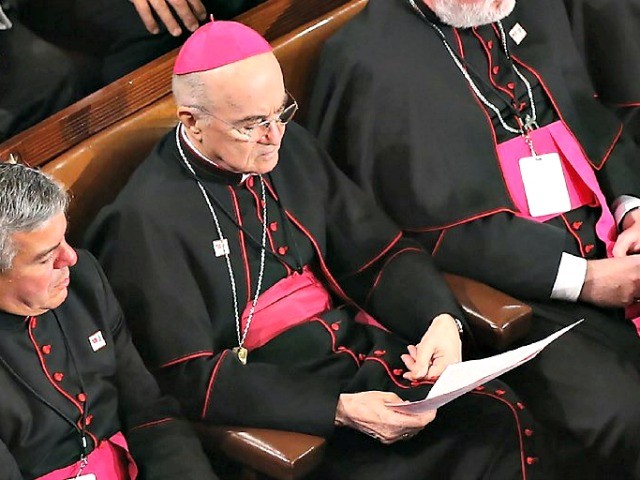 The Vatican announced Saturday that it will begin an investigation into the serial homosexual abuse of former U.S. cardinal Theodore McCarrick in the face of mounting pressure to address the issue.

The Vatican will undertake a “thorough study of the entire documentation present in the Archives of the Dicasteries and Offices of the Holy See regarding the former Cardinal McCarrick, in order to ascertain all the relevant facts, to place them in their historical context and to evaluate them objectively,” the statement said.

The statement said that the Holy See had been notified by the Archdiocese of New York of accusations against McCarrick as far back as September 2017.

On August 25, however, a former papal nuncio to the United States, Archbishop Carlo Maria Viganò, released an 11-page bombshell report in which he claimed to have informed Pope Francis personally of McCarrick’s record of abuse in 2013, shortly after the papal election.

Viganò also claimed that Francis had reinstated McCarrick to a position of influence in the Vatican, lifting previous sanctions that had been privately imposed on the former cardinal by Pope Benedict XVI.

In 2014, the Washington Post described McCarrick as a go-to person for Pope Francis, noting that he had been “put out to pasture” by Pope Benedict.

“Francis, who has put the Vatican back on the geopolitical stage, knows that when he needs a savvy back channel operator he can turn to McCarrick,” wrote veteran Vatican analyst David Gibson at the time.

Without mentioning the Viganò report, Saturday’s Vatican communiqué said that Pope Francis is “aware of and concerned by the confusion that these accusations are causing in the conscience of the faithful.” Nonetheless, it made no mention to allegations that the pope himself had seriously mishandled the case.

In mid-August, the U.S. Conference of Catholic Bishops (USCCB) formally requested that Pope Francis open a full investigation — an “apostolic visitation” — into the McCarrick case, including who had enabled his rise in the clerical ranks and who had benefited from his patronage. A month later, the president of the conference, Cardinal Daniel DiNardo traveled to Rome to personally urge the pope to accede to the bishops’ request.

An “apostolic visitation from the Holy See that included lay professionals would be a particularly effective way” to get to the bottom of this, said New York cardinal Timothy Dolan, who added that he had become “impatient” waiting for the pope to act. “We’ve proposed that to the Holy See and we wait.”

Frustrated with Rome’s inaction in the matter, the U.S. bishops announced in late September their own lay-led investigation into McCarrick’s abuse, focusing on the four dioceses in which McCarrick worked: New York, Metuchen, Newark, and Washington, D.C.

Unlike the Vatican, however, the USCCB does not have the canonical authority to require compliance with such an investigation, and so depends on the voluntary cooperation of the four dioceses involved.

The following week, a group of lay Catholics revealed that it was launching its own full inquiry into all the cardinals of the Catholic Church and their relationship with abuse.

The Better Church Governance Group (BCG) held its inaugural meeting on the campus of the Catholic University of America (CUA) in Washington, DC, on September 30 and announced its intention to investigate each of the 124 cardinals eligible to participate in the next papal conclave to elect the pope.

The BCG said it intends “to hold the hierarchy of the Catholic Church accountable for abuse and corruption, and to develop and support honesty, clarity, and fidelity in Church governance.”

Pope Francis has come under fire for keeping silence regarding the accusations made against him. Confronted by journalists, he has refused to either confirm or deny the Viganò allegations and has declined to reveal when he learned of McCarrick’s abuse.

Francis has instead lashed out at “accusers,” suggesting that they are self-serving and act like Satan.

Saturday’s Vatican communiqué said that the Holy See is conscious that “it may emerge that choices were taken that would not be consonant with a contemporary approach to such issues” but promised that it would “follow the path of truth wherever it may lead.”

“Both abuse and its cover-up can no longer be tolerated and a different treatment for Bishops who have committed or covered up abuse, in fact represents a form of clericalism that is no longer acceptable,” it said.

The statement also said that the Vatican will “in due course, make known the conclusions of the matter regarding Archbishop McCarrick.”