In exclusive statements to Breitbart News, officials with the Metropolitan Republican Club said Antifa had been trying to shut down their event on Friday evening with conservative pundit Gavin McInnes.

According to one official, members of Antifa had harassed the online ticket vendor Eventbrite, which the GOP Metropolitan Club used to sell tickets for the McInnes event at their headquarters.

The official said Antifa had “desperately” been trying to get the Metropolitan Republican Club to cancel the McInnes speech. The group’s latest attempt came shut down the event involved vandalising the club’s 1930s, pre-war building and leaving a threatening letter, which Breitbart News has obtained. 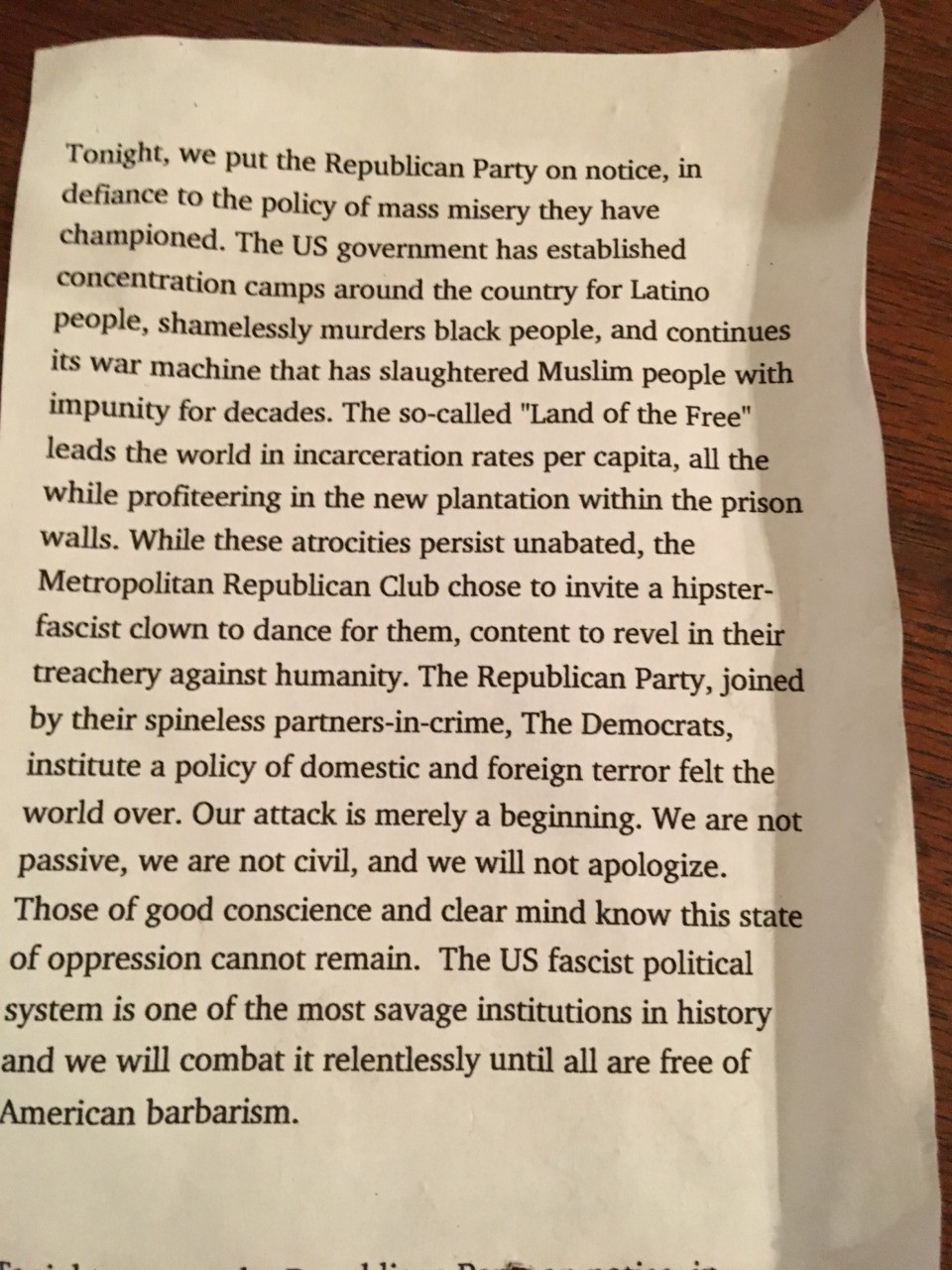 (A letter left by Antifa vandals which threatens the Metropolitan Republican Club with violence.) 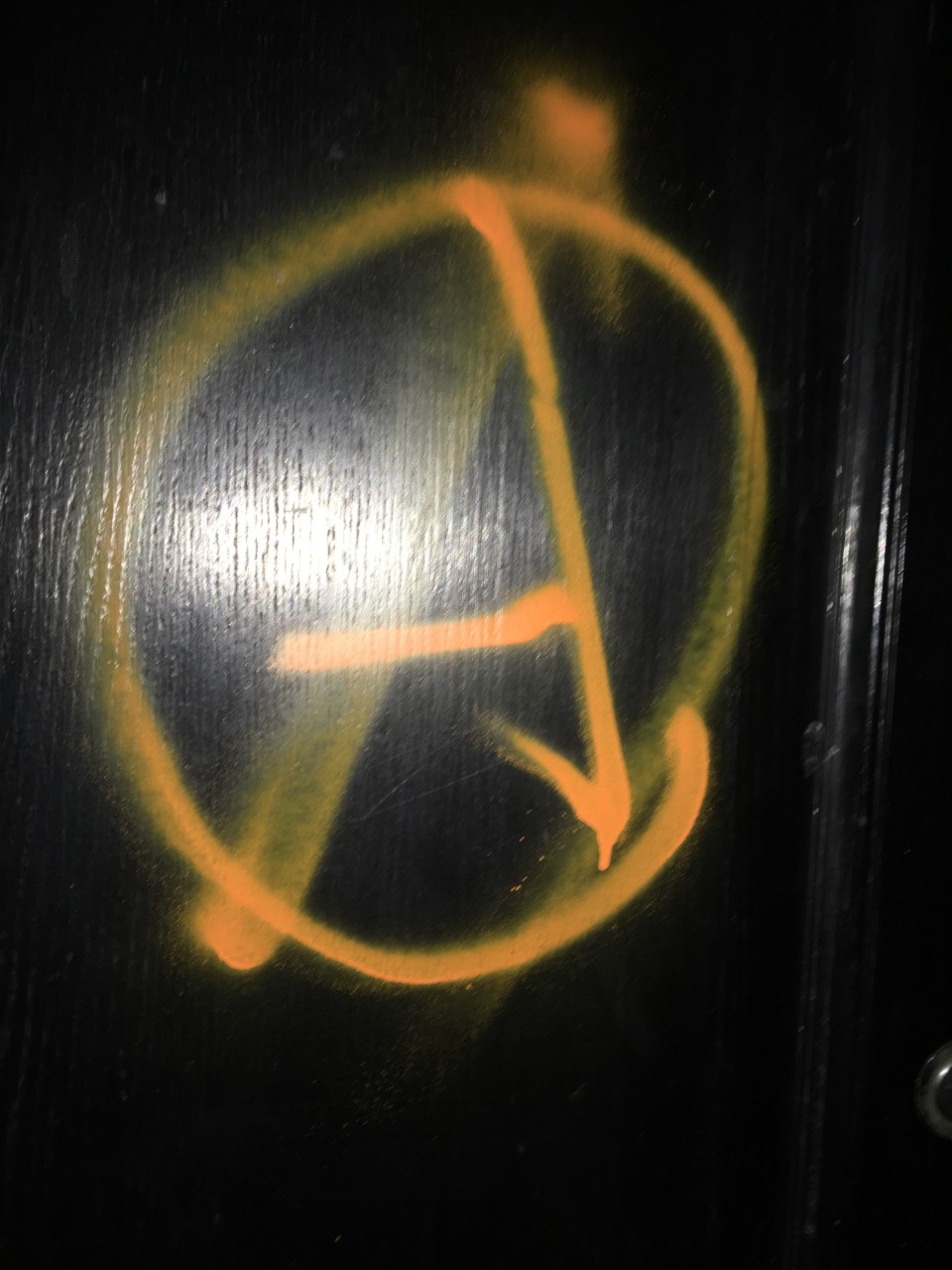 An apparent anarchist symbol was spray-painted on the doors of the club’s 1930s, pre-war building. 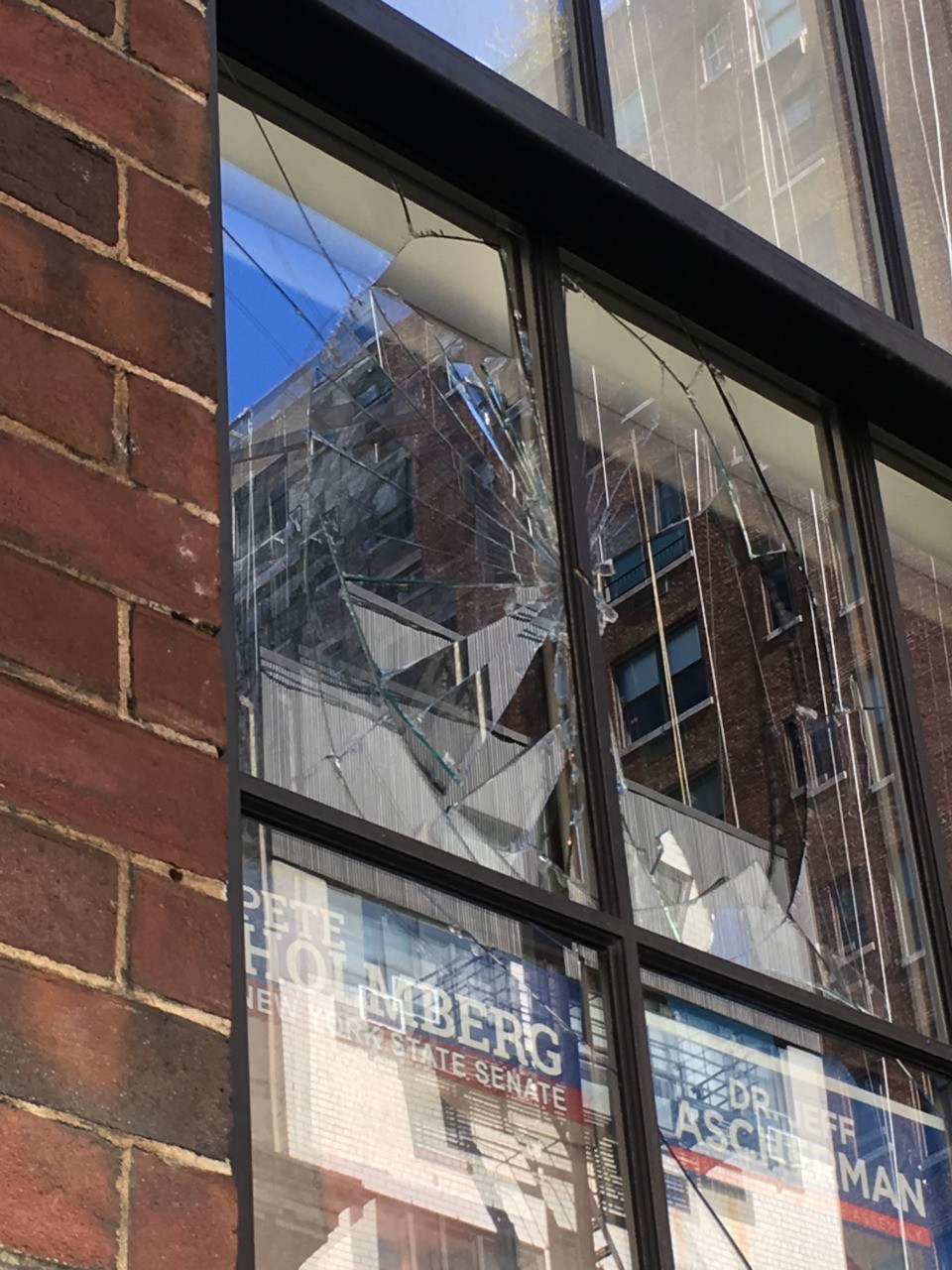 A closeup of the building’s smashed window.

“Tonight, we put the Republican Party on notice,” the letter begins, labeling McInnes a “hipster-fascist clown” and accused the club members of “treachery against humanity.”

“Our attack is merely a beginning. We are not passive, we are not civil, and we will not apologize,” the letter continues. “Those of good conscience and clear mind know this state of oppression cannot remain.”

Metropolitan Republican Club officials say they are not canceling their event with McInnes and that they will “move forward” from the vandalism.

A full statement from the club, obtained by Breitbart News, states:

Last night the Metropolitan Republican Club was vandalized by the leftist hate group Antifa, who also left a note promising ‘this is just the beginning’ and threatening more violence. Republicans are a minority party in NYC by a wide margin, and while most city residents are respectful of our activities, our grassroots efforts are often met with hostility. Last night’s shameful assault by Antifa cowards represents a tragic new low, and is sadly only the most recent example of leftist violence and aggression against the conservative movement. But rest assured that we will not be intimidated by violence, threats, or hate speech. We will continue to fight for freedom and liberty here in New York City and all across this great nation.

The club, a famed meeting place and campaign headquarters for countless Republicans, had its windows shattered and doors defaced with spray paint.

“I cannot recall something like this,” Ed Cox, Chairman of the Republican Party of New York State, told the New York Times’ Shane Goldmacher. “Whoever these people are, we don’t want to be part of getting their message out. They don’t deserve it.”

Deborah Coughlin, the club’s president, called the police after spotting the vandalism, according to Cox.

NEW: The Metropolitan Republican Club in Manhattan was vandalized last night. Windows broken. Doors defaced. They left a note, too.

“I cannot recall something like this,” says Ed Cox, GOP party chairman.