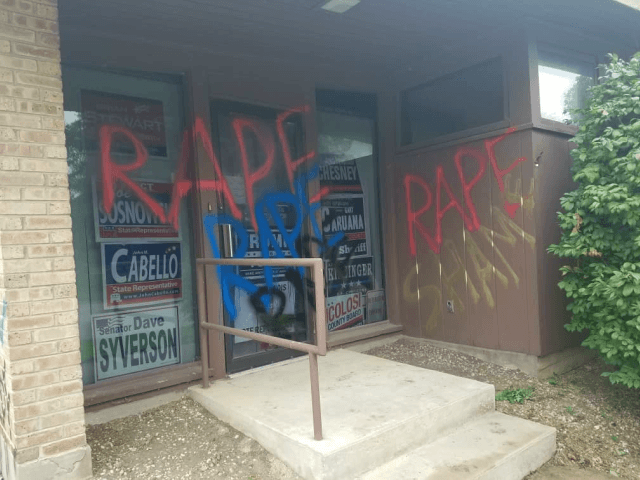 A group of vandals defaced an Illinois county’s GOP headquarters early Sunday morning with the words “rape” and “shame” painted in graffiti.

The vandalism on the front doors of the Winnebago County GOP’s headquarters in Rockford, Illinois, was on full display Sunday morning, leading local Illinois Republicans and Democrats to swiftly condemn the violence, WREX reported.

“We can have our differences. We can have good spirited debate. I hope whoever is responsible for this will be brought to justice. You are a coward for doing it unless you come forward!” Illinois Rep. John Cabello, a Republican, posted on his Facebook page.

“This type of behavior is unacceptable and certainly does not live up to our community’s values. We all have differences but we must learn to disagree on policy without attacking people.”

Some Republican leaders, like Illinois state Sen. Dave Syverson, believe that the violence may have been motivated by Sen. Dianne Feinstein’s (D-CA) during the Senate Judiciary Committee hearings to confirm Supreme Court nominee Brett Kavanaugh.

“These are the unintended consequences, when you take politics to a level that she did,” Syverson told WREX. “Unfortunately this probably wont’ be the last.”

Police are investigating to find out who carried out the vandalism.