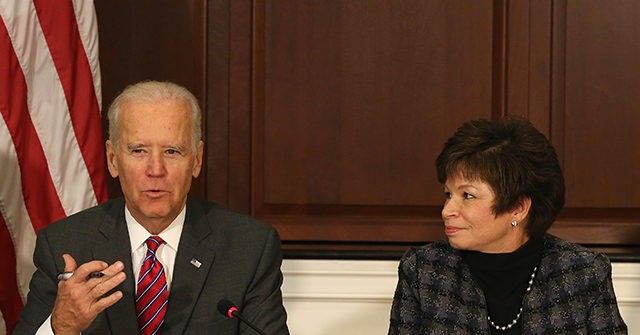 Valerie Jarrett, a longtime friend and top adviser to former President Barack Obama, said on Thursday in an online interview with the Washington Post that former Vice President Joe Biden is the right person to be president “at this moment,” and she looks forward to him being sworn into office in January 2021.

“I think his message is spot on,” said Jarrett, who then referred to Biden meeting with the family of George Floyd, who died last month at the hands of the Minneapolis police. “I teared up when I heard his remarks the other day. His phone call with the [Floyd] family where he listened and was empathetic.”

“His willingness to go down to Houston and be with the family and really talk through ideas on how we can move forward,” Jarrett said. “I think the message and the tone and the authenticity is perfect.”

Valerie Jarrett says she has “every confidence” that Joe Biden is just what the country needs right now. https://t.co/3ZDEGxgNJB pic.twitter.com/9LND6Bk5v1

“I’m also delighted that he’s hired some new folks that used to be a part of my team in the White House,” Jarrett said. “He has an amazing team that is getting up and running now as he prepares for the general election.”

“So I have every confidence that he’s actually just what our country needs at this moment and I hunger for his voice during the campaign and I sure look forward to him being sworn in on January 20th of next year,” Jarrett said.

Jarrett, who now runs a voting rights group, also said that the coronavirus and the national unrest in the wake of Floyd’s death shows the need for more federal oversight.

“[It has been] a very painful civic lesson about how important government actually is in all of our lives at every level of government,” Jarrett said.

She also called for a national registry for police in the interview.