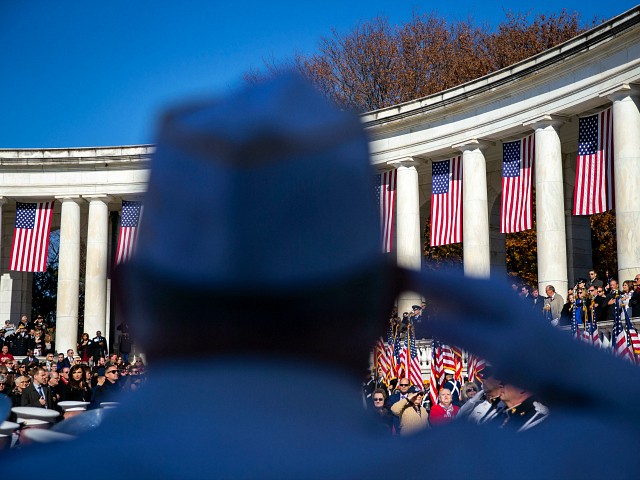 “This day reminds all Americans that they sleep soundly at night because of the sacrifices of millions of ordinary men and women,” Bob Wilkie said.

“It is for all who have served at all the lonely outposts, and the military at home and in distant lands, who left families and loved ones and who overcame challenges that many of us would find unimaginable,” he said.

He noted the 100th anniversary of World War I, which was once believed to be the “war to end all wars.”

“On the 11th hour of the 11th day of the 11th month, men who have lived and fought in trenches that scarred the face of Europe emerged after four years of fighting and for the first time, smelled the warm air of peace,” he said.

“All told, more than 41 million American men and women have served in times of war at almost 700,000 have given the last full measure. And if you ask any of them why they did it, they would tell you, it was the right thing to do.

Wilkie said, “as the son of a gravely wounded combat soldier,” an officer, and a leader in the Pentagon, he has spent a lifetime watching those who have “borne the battle.”

“And I have seen it through the eyes of my elementary school classmates at Fort Sill and Fort Bragg, whose fathers did not come back from Vietnam,” he said.

Quoting former president and Gen. Dwight D. Eisenhower,  Wilkie said “Your country can never compensate you for what you have given to your country.”

“But you have a charge from me,” he said. “You never put your uniform away. You live to remind your fellow citizens why they sleep soundly at night.”

Closing, he recalled the words of former President Ronald Reagan.

“In May of 1986, as Ronald Reagan awarded Gen. Ridgeway the Presidential Medal of Freedom, he said of him, heroes come when they’re needed, great men step forward when courage seems in short supply,” he said.

“This day is about great men and women, whom we can never forsake. So may God bless you, God bless all who have served this great republic, and God continue to bless the United States of America.”