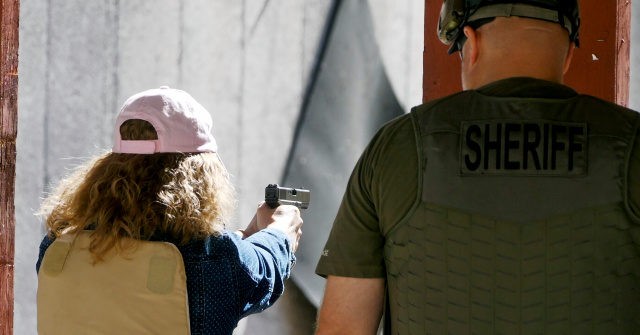 Over 30 armed teachers gathered in Spanish Fork, Utah, for police training in locating and taking out active shooters.

The Associated Press reports that the training occurred “inside a warehouse set up to look like a school.”

In one scenario, school psychologist Nancy Miramontes had to navigate hallways and walls, find the attacker, and shoot him. She “fired three shots,” one of which would have hit the active shooter in the forehead had the scenario been real life.

Miramontes received praise from the officer nearby. She had demonstrated that she could shift from nurturer to defender by recognizing a threat and removing it.

Afterward, Miramontes said, “I know how to protect myself and my students now; I know what to expect if the worst happens.”

Utah is one of a number of states that allow teachers to be armed on campus for classroom defense. Teachers can be armed in Colorado and Florida after receiving a certain amount of training. And Virginia’s Lee County not only allows armed teachers but supplies their guns.

Texas responded to the December 14, 2012, Sandy Hook attack by allowing teachers and staff to be armed. They originally stipulated that there could be only one armed school employee per 200 students, but that artificial cap was eliminated on June, 6, 2019, when Gov. Greg Abbott (R) signed legislation to repeal it.

The repeal means schools and districts can make their own decisions about how many teachers and staff to arm.