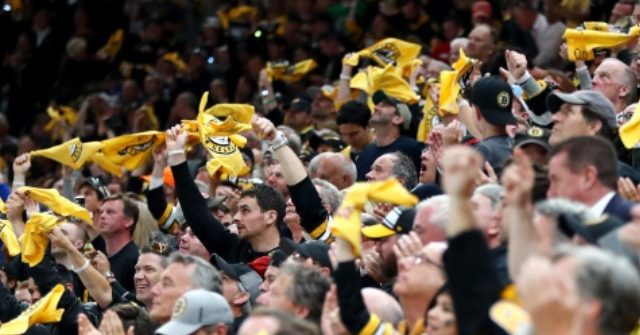 USA Today Sports columnist Hemal Jhaveri has accused the Boston Bruins of siding with “misogyny” and a majority white male audience, by partnering with the Barstool Sports website in a recent stadium promotion.

During Game 2 of the Stanley Cup Final at the Bruins’ TD Garden, fans will be treated to rally towels co-sponsored by the popular sports website Barstool Sports. But the partnership is one that Jhaveri claims should “embarrass any fan who claims to love hockey.”

Jhaveri points to controversial statements made by Barstool founder Dave Portnoy as his reason for such disdain.

“For those who aren’t aware, Barstool and its founder, Dave Portnoy, have a troubling and well-documented history of harassment against women,” Jhaveri exclaims. He goes on to list, “some of their more egregious behavior” at the website.

Jhaveri recounts Portnoy’s off-color comments about female sports reporter Sam Ponder, for example. Portnoy once dismissed Ponder as someone whose only job is to “make men hard.” He also called her a slut several times.

Jhaveri then says that Portnoy also taunted Deadspin writer Laura Wagner, and according to Jhaveri, the site and its fans launched a harassment campaign against comedienne Miel Bredouw after she accused the site of stealing her jokes.

“Anyone familiar with the sports media ecosystem knows that this is how Barstool works,” Jhaveri said still on the attack. “Any attempt to hold them accountable for their reprehensible behavior will be met with an onslaught of attacks from their fan base.”

Jhaveri exclaims that “the Barstool culture is one that promotes sexism, misogyny and cyberbullying” and proceeds to criticize the Boston Bruins for partnering with the site for the towel promotion.

Then Jhaveri gets to the meat of his attack:

If the Bruins are committed to being more inclusive and diverse, as they claim to be via their Hockey is for Everyone involvement, why would they consent to have their logo alongside that of a company that has a nasty track record of trafficking in hate against women? Not only are the rally towels going to be shown on national television tonight as the Bruins take on the St. Louis Blues, but they publicly thanked Barstool and Portnoy on social media.

Jhaveri says that the Bruins may be “unaware” of “Barstool’s history” and that would be an “egregious oversight.” But the columnist also strikes saying, “maybe they just don’t care.”

Regardless, Jhaveri says, the Bruins should not be courting the “largely male, largely white” Barstool audience while “disregarding the rest of their audience, i.e., everyone who isn’t white and male.”

“Barstool thrives because organizations, like the Boston Bruins and many mainstream media sites, allow it to,” Jhaveri concludes with one last jab. “By willfully partnering with Barstool and ignoring their past behavior, the Bruins are propping up a system of misogyny that harasses and terrorizes women. That’s something that’s hard to cheer for.”