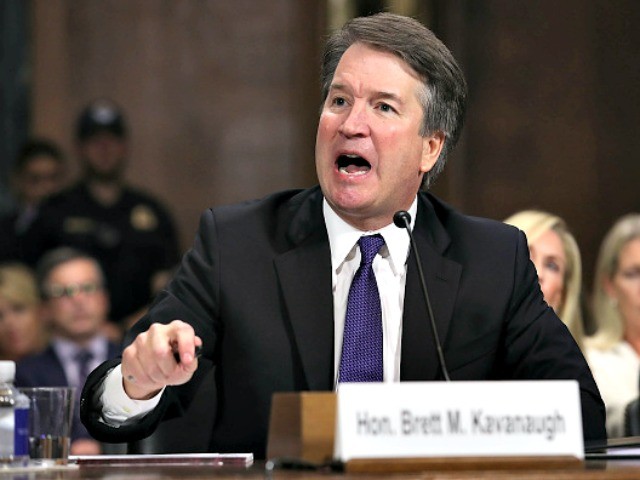 USA Today deleted a tweet promoting an article suggesting that Supreme Court nominee Brett Kavanaugh should “stay off basketball courts when kids are around” and not coach girls’ basketball because he was accused of sexual assault.

The newspaper retracted the portion of the article containing that statement after receiving heavy backlash on social media.

A previous tweet contained a statement that has since been edited out of a sports column. That tweet has been deleted. The updated opinion column and editor’s clarification are here: https://t.co/zhFOWMIjCb

“A previous tweet contained a statement that has since been edited out of a sports column. That tweet has been deleted,” the paper wrote in a Saturday evening tweet.

USA Today also provided a short editor’s note at the beginning of the sports column “clarifying” the intent of the article, merely stating that it was “the writer’s opinion”:

Editor’s note: Supreme Court nominee Judge Brett Kavanaugh has told members of the Senate Judiciary Committee he loves coaching his daughters’ girls basketball teams, but said in testimony Thursday “thanks to what some of you on this side of the committee have unleashed, I may never be able to coach again.”  The intent of this commentary was to address that question. The column was re-edited to more closely reflect that intent and labeled to reflect it as the writer’s opinion.

The article focused on Kavanaugh’s emotional testimony before the Senate Judiciary Committee on Thursday when Kavanaugh said that California psychology professor Dr. Christine Blasey Ford’s allegations brought to the committee’s attention by Senate Democrats ruined his reputation to the point where he may never be able to coach girls’ basketball again.

“The U.S. Senate may yet confirm Kavanaugh to the Supreme Court, but he should stay off basketball courts for now when kids are around,” wrote sports columnist Erik Brady.

Thousands of people slammed the paper for its “disgraceful” journalism before USA Today updated its article, but some people have not been so forgiving of the paper:

@USATODAY deleted the original tweet about this shameful piece because it got ratio’d into oblivion, not because they are trying to correct their disgusting take. They obviously make no apologies for their gross implication against Judge Kavanaugh and are doubling down. https://t.co/zD9mupT71F

You did go far enough in J School to know what Libel & Slander are, right? Let’s face it: Excellent Political Journalism DIED when Tim Russert Did. https://t.co/EvtVr3V1Re

How NOT to print an apology. USA Today is toast. https://t.co/mQ2fGe1Kg7

It was beyond despicable. Shame on you. I’ll always remember it. Firing the columnist wouldn’t be enough for me. You should voluntarily pay the Kavanaugh family damages. Shame on you forever. https://t.co/H3ojkVN208