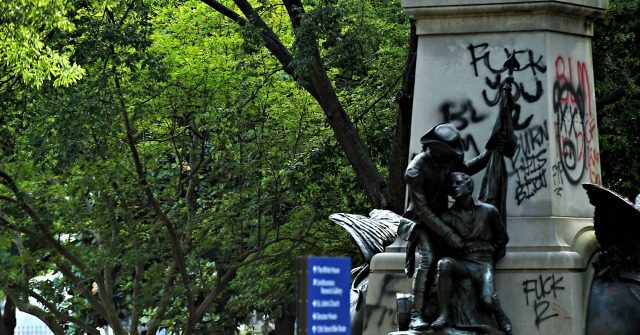 The United States Park Police issued a statement about the events in Lafayette Park over the weekend, including about the charge that officers used tear gas against peaceful protesters to clear the area so that President Donald Trump could visit the historic St. John’s Church, which was targeted by protestors.

While protesters in St. Paul, Minnesota held a moment of silence, CNN goes there live for an interview only to get shouted down for ruining the silence.

Protesters start to yell at CNN saying “shhh” & multiple calls for the CNN reporter to “silence.”

The statement said not only did officers not use tear gas at the park, but that the protesters were violent and that many officers were injured.

The federal law enforcement agency also said despite the rioters actions, no arrests were made:

The United States Park Police (USPP) is committed to the peaceful expression of First Amendment rights. However, this past weekend’s demonstrations at Lafayette Park and across the National Mall included activities that were not part of a peaceful protest, which resulted in injuries to USPP officers in the line of duty, the destruction of public property and the defacing of memorials and monuments. During four days of demonstrations, 51 members of the USPP were injured; of those, 11 were transported to the hospital and released and three were admitted.

Multiple agencies assisted the USPP in responding to and quelling the acts of destruction and violence over the course of the weekend in order to protect citizens and property.

On Monday, June 1, the USPP worked with the United States Secret Service to have temporary fencing installed inside Lafayette Park.  At approximately 6:33 pm, violent protestors on H Street NW began throwing projectiles including bricks, frozen water bottles and caustic liquids. The protestors also climbed onto a historic building at the north end of Lafayette Park that was destroyed by arson days prior. Intelligence had revealed calls for violence against the police, and officers found caches of glass bottles, baseball bats and metal poles hidden along the street.

To curtail the violence that was underway, the USPP, following established policy, issued three warnings over a loudspeaker to alert demonstrators on H Street to evacuate the area. Horse mounted patrol, Civil Disturbance Units and additional personnel were used to clear the area. As many of the protestors became more combative, continued to throw projectiles, and attempted to grab officers’ weapons, officers then employed the use of smoke canisters and pepper balls. No tear gas was used by USPP officers or other assisting law enforcement partners to close the area at Lafayette Park. Subsequently, the fence was installed.

Throughout the demonstrations, the USPP has not made any arrests. The USPP will always support peaceful assembly but cannot tolerate violence to citizens or officers or damage to our nation’s resources that we are entrusted to protect.

Facts matter & we should demand journalism. @cnn, @jaketapper, @RyanLizza, @abbydphillip & @JFKucinich should all correct their previous & erroneous reporting with this Park Police statement. They all watched something on TV & then claimed everyone was peaceful. They were wrong. https://t.co/EplZs9Vymb

CNN, CBS, MSNBC and everybody else now either need to prove the Park Police Chief a liar with actual evidence (let’s say a physical tear gas canister or rubber bullet, which should be easy if a protest was crushed by them), or retract the coordinated fake news they unleashed