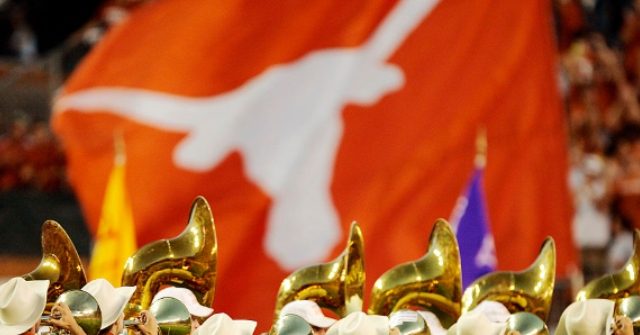 The University of Texas Longhorn band will not play the school song, “The Eyes of Texas,” this coming weekend after several members said they are unwilling to perform the song.

The decision comes on the tail of a survey sent from the band’s leader, Scott Hanna, to the members asking their opinion about playing the song, according to the Texas Tribune.

The survey results reportedly showed the band members evenly divided on playing the school’s more than a 100-year-old theme that many are now calling “racist.” However, the song was canceled because enough members in individual sections of the band came down on the side of canceling the song making playing the music impossible.

The survey is only focused on playing the song for this weekend’s game against Baylor University. However, the band has yet to play the tune at all this season.

The song, though, will not go unheard during this weekend’s game. UT-Austin President Jay Hartzell announced that a recording of the song would be played over the public address system.

“We knew this summer that, as we make our campus a more welcoming place, we would face many hard conversations,” Hartzell said in his announcement. “I remain truly optimistic that we will find ways to join together around our song, which has been so positive for so many Longhorns over the past 120 years.”

Activist students have been agitating against the song over its supposed connection to minstrel performances in the early 1900s.

In August, Longhorn Band drum major Ally Morales insisted that she would never again lead the band to play the school’s theme song, claiming that it is “racist.”

“It’s not ultimately about the song, it’s about ingrained, institutionalized racism that frankly, in invisible form, takes the image of a school song,” Morales said, according to the Dallas Morning News. “Removing our alma mater is the first step to realizing the oppression that the Black students face on campus and off-campus.”

Despite the woke students’ attempt to delete the school’s song, the university has thus far resisted the effort. In July the school said that the song will not be replaced this year.