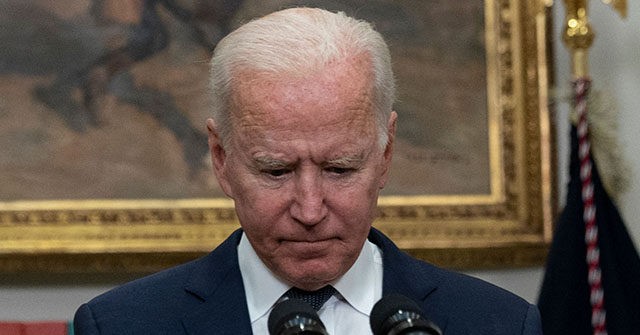 Twelve elected Republicans are demanding Thursday for President Joe Biden to resign over the deadly Afghan extraction amid reports of Americans being killed in bombing attacks in Kabul, Afghanistan.

Joe Biden has blood on his hands.

The buck stops with the President of the United States.

This horrific national security and humanitarian disaster is solely the result of Joe Biden’s weak and incompetent leadership. He is unfit to be Commander-in-Chief.

Maybe looking at them as real people instead of ‘papers to push’ would produce rescues rather than deaths.

While we are supposed to be the most powerful military in the world, we now see our leader and so-called Commander-in-Chief completely kneeling to the Taliban and asking for their permission to get our people out of there.

As our adversaries watch on, one can only imagine they have determined America is vulnerable right now. The American people are at risk, and we cannot afford to wait for the next crisis to strike. President Biden is not up to role of Commander-in-Chief and should resign. (6/6)

These past few days have proven what we’ve already known about Biden and Harris.

They are completely unfit to lead.

Calling on the leader of the free world to resign his office immediately weighs heavy on my heart, but this must happen to restore American’s safety both at home & abroad, our honor, & faith in the Chief Executive to faithfully execute the duties of the Presidency.

Others frustrated with Biden’s incompetence have also called for Biden’s resignation:

Secretary of State Blinken and his deputy Wendy Sherman left Americans and locally employed staff in Afghanistan while the US and NATO troops evacuated.

They must now resign.

This is the biggest failure by a US President in my lifetimes. Biden and his administration must all resign in shame

Americans will die in Afghanistan for no reason whatsoever.

Biden’s senility caused him to ignore the IC and common sense.

People could have been uneventfully evac’d weeks ago.

There’s no excuse. Biden is unfit and must resign or be removed. https://t.co/0a2Co7JPnt

My heart breaks for the thousands of people trapped in the chaos that Joe Biden created.

So many people told him this would happen, and he did it anyway.