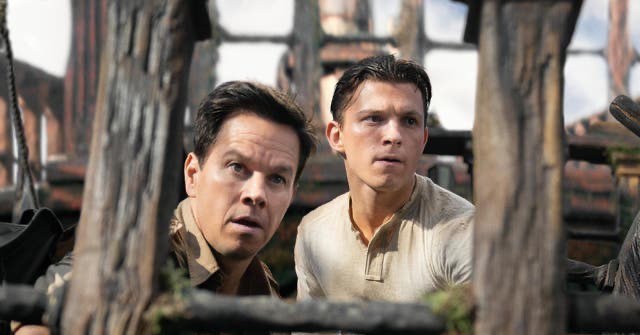 After an action teaser ruined by painfully obvious green screen, our story begins with a flashback 15 years ago to when our protagonist, Nathan Drake (Tom Holland), is a ten-year-old orphan who worships his older brother, Sam. Somehow Nathan and Sam managed to break into a museum (that left a window open or something). After the two of them are caught trying to steal a map, they’re returned to the orphanage.

Rather than go to prison, Sam takes off looking for treasure and adventure.

Fifteen years later, and for motives that never make sense, Nathan is a flashy bartender in an upscale gin joint who sidelines as a pickpocket. Then, one night, Sully (Mark Wahlberg), a smooth-talking adventurer, shows up and offers Nathan the opportunity to join him in the hunt for $5 billion in gold supposedly hidden by the Magellan expedition some 500 years ago.

Everything up to this point is thuddingly awful — the dialogue, characters, plot points, and exposition come off like the first draft of a screenplay, aping much better movies. Unfortunately, the unimaginative heist that follows is not much better.

Thankfully, once Nathan and Sully arrive in Barcelona, things improve significantly with the arrival of Chloe (Sophia Ali) and Jo (Tati Gabrielle), two women from Sully’s past who are every bit his equal when it comes to double-dealing and mercenary adventure-seeking.

The overall story — a C-grade mix of Indiana Jones, National Treasure, and Mission: Impossible — is never clever or exciting. One problem is Holland’s lack of emotional depth, along with the miscasting of the ever-earnest Wahlberg as a backstabbing rogue. In addition, the two men have no chemistry — Hope and Crosby they are not.

Instead, it’s the two charismatic women who deliver the goods. Once Chloe shows up and Jo steps up, the story comes to life. That, plus a pretty exciting finale, ultimately allow you to walk out thinking, Not bad.

The movie’s real problem is that you never believe these characters are flesh and blood. Other than a line or two of backstory, they have no emotional life. Holland doesn’t have the range to make you believe Nathan’s wounded by his missing brother, so this subplot comes off as phony as the green screen.

Worse still, we’re promised a romance between Nathan and Chloe, up to and including the two of them sharing a luxury hotel room. But as we all now know, the Woke Moral Majority has outlawed sex and romance — those vital storylines that are so effective at fleshing out characters and bringing them to life. So, although we’re teased and teased and teased with the possibility of romance, nothing happens between Nathan and Chloe — a stupid choice that is both self-consciously political and — given the build-up — absurd.

Uncharted has been in development hell for so long, 50-year-old Wahlberg was attached initially to play Holland’s role (which would have made for a better all-around fit) and the stink of those 15 years of development, of all those cooks, hangs over everything.

But if you’re looking for some big-screen spectacle and distraction that’s not bad, you could do a lot worse, starting with the inert Death on the Nile (2021), which I also saw last night.