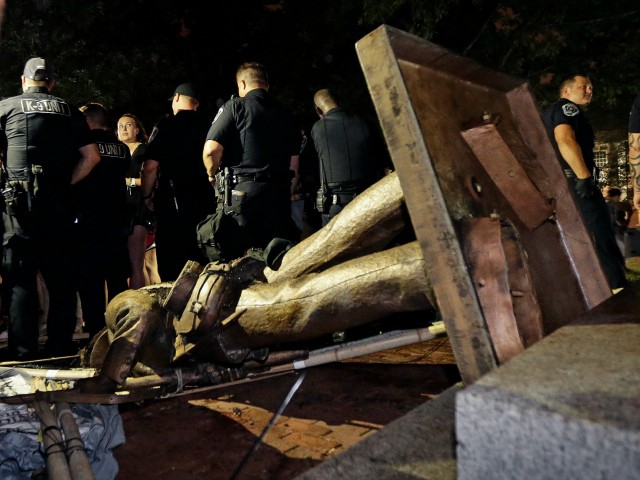 Nearly 100 teaching assistants and instructors went on strike on Friday in response to the University of North Carolina at Chapel Hill constructing a building to house a Confederate statue on campus.

Nearly 100 UNC Chapel Hill teaching assistants have gone on strike, threatening to withhold their students’ final grades, unless the university ceases construction of a building that will house a Confederate statue.

The Confederate statue, known as Silent Sam, had been standing on UNC Chapel Hill’s campus for over 100 years, until it was torn down by protesters in August 2018.

Students had surrounded the statue on August 20, calling for its removal, until finally deciding to topple it themselves.

The university’s board of trustees have since decided to relocate the statue to inside a building, in what is likely an attempt to quell more potential protests in the future aimed at demolishing school property.

Teaching assistants are now taking matters into their own hands, and depriving students their grades until their demands are met.

Join the TA strike. The university works because we do. And we will not let it work against our students and for white supremacy #strikedownsam https://t.co/P4FuzaGCXS

Included on their list of demands is that the board of trustees withdraw their proposal — worth $5.3 million — to construct the new building for Silent Sam, that student fees do not increase as planned, and “that the Confederate monument never return to campus in any shape or form.”

Nearly 100 teaching assistants and instructors have allegedly participated in the strike.

“Such actions have been interpreted as coercion and an exploitation of the teacher-student relationship and in fact are a violation of students’ First Amendment rights as well as federal law,” affirmed Blouin in his email.

As it currently stands, over 2,000 students will be affected by the teaching assistants’ plan to withhold their grades until demands regarding the statue are met.