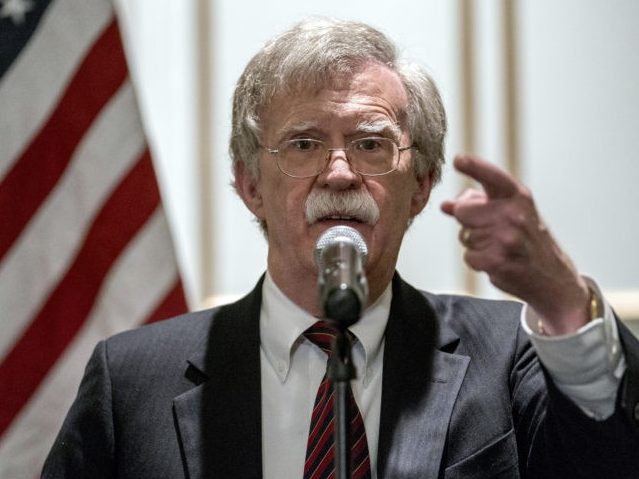 “It is simply regrettable I would say, to say the least, that a senior U.S. official – not to name him, Mr. Bolton – went to the extent of threatening judges of the ICC,” Dieng said.

“So simply because the justice system in this country is so strong and I would have hoped to see the same support to be deflected with the International Criminal Court,” Dieng said.

Bolton made the announcement about the U.S. break with the court, which he called “fundamentally illegitimate,” during a speech at a gathering of the Federalist Society in Washington, DC, on the eve of the September 11, 2001, terror attacks by radical Islamists on U.S. soil that killed almost 3,000 innocent Americans.

The timing of the announcement, Bolton said, was because of an expected imminent ICC announcement that it would launch an investigation into the 17-year-old war in Afghanistan and alleged war crimes committed since it began, including some committed by the United States military and intelligence personnel.

“In November of 2017, the ICC Prosecutor requested authorization to investigate alleged war crimes committed by U.S. service members and intelligence professionals during the war in Afghanistan—an investigation neither Afghanistan nor any other State Party to the Rome Statute requested,” Bolton explained. “Any day now, the ICC may announce the start of a formal investigation against these American patriots, who voluntarily went into harm’s way to protect our nation, our homes, and our families in the wake of the 9/11 attacks.”

Bolton said unequivocally that the U.S. would halt all ties to the court.

“Today, on the eve of September 11th, I want to deliver a clear and unambiguous message on behalf of the President of the United States,” Bolton said. “The United States will use any means necessary to protect our citizens and those of our allies from unjust prosecution by this illegitimate court.”

On Wednesday, Dieng also said that the U.S. decision is “not new” and the United States has previously “threatened” countries with the withdrawal of financial support if they supported the court, but gave no specifics.

Dieng’s appearance, along with Santiago Villalpando, chief of the Treaty Section, Office of Legal Affairs, at the U.N., was to discuss the push for universal ratification of the Genocide Convention of 1948 on the occasion of its 70th anniversary this year.

To date, Dieng said 149 countries have ratified the convention, including the United States, but 45 states in Asia, Africa, and Latin America have not.