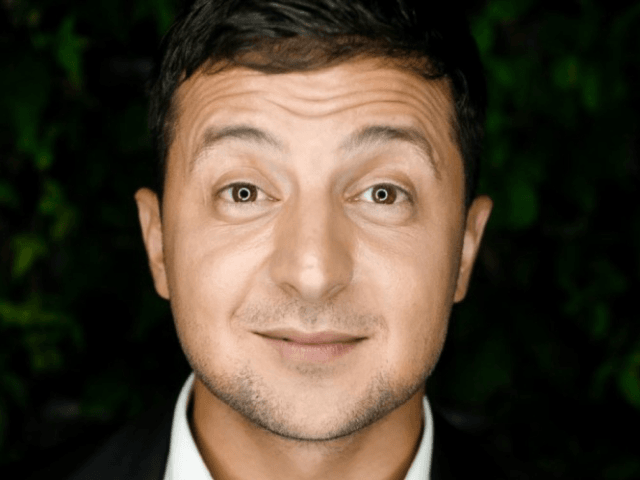 Ukrainian comedian Vladimir Zelenskiy, who plays the president of Ukraine on a TV show, appears to have pulled into the lead in the actual presidential election contest.

The latest poll shows Zelenskiy with a commanding nine-point lead over incumbent President Petro Poroshenko, who in turn leads the former favorite in the race, former Prime Minister Yulia Tymoshenko, by two points.

The Associated Press on Thursday cited a Kiev International Institute of Sociology poll that put the race at Zelenskiy 27 percent, Poroshenko 18 percent, and Tymoshenko 16 percent, with a 3.3 percent margin of error. The election will be held on March 31.

This was not the first poll to show Zelenskiy as a serious contender in the race and possibly the frontrunner. The 41-year-old Jewish comedian has 20 years of experience in stand-up comedy but none whatsoever in elective politics. He is not running as a joke; he presents himself as an outsider with a “fresh face” who wants to clean up government corruption, somewhat in the mold of recently-elected President Nayib Bukele of El Salvador. Some observers have also compared his anti-establishment style and appeal to voters disgusted by the current system with Donald Trump.

The TV show that propelled Zelenskiy to the height of fame is called “Servant of the People,” and has been running since 2015. Zelenskiy’s character is a high-school teacher who unexpectedly sweeps into the presidency of Ukraine after he goes on a tirade against corruption in class and one of his students posts it online.

The unlikely president and his friends become zany but good-hearted crusaders against corruption, much of which is adapted from real stories in Ukraine both before and after the downfall of the fabulously corrupt Russia-backed president Viktor Yanukovych. Zelenskiy declared his candidacy on New Year’s Eve on the same channel that carries his TV show.

“Servant of the People” can be seen in the United States on Netflix. Most of the episodes have also been uploaded to YouTube, which added greatly to Zelenskiy’s social media following in Ukraine, although only some of the YouTube videos are translated into English. Some of it would be considered problematic if Zelenskiy was running for office in the United States unless he joined the Democrat Party and ran in Virginia.

Zelenskiy has also benefited from the popularity of his stand-up comedy routines mocking Poroshenko, whose spotty record of delivering on the promises of the Euromaidan revolution is the underlying theme of “Servant of the People.”

Ironically, critics portray Zelenskiy himself as merely a sock puppet for an oligarch, banking billionaire and Poroshenko gadfly Ihor Kolomoisky. Newsweek last week quoted the Center for Eastern Studies in Warsaw’s assessment that Kolomoisky is the real adversary Poroshenko faces in the election, as he backed Tymoshenko at first, then Zelenskiy after she flamed out.  Zelenskiy denies Kolomoisky has any influence on his campaign.

Newsweek also quoted analysts who believe Zelenskiy’s front-runner status is fragile, his candidacy largely a vehicle for voters to express their disgust with the system, and Tymoshenko’s voters would likely come home to Poroshenko to defeat the comedian in a runoff election.

The Russians, of course, think this twist in the Ukrainian election is hilarious and relish the embarrassment Poroshenko faces. In a profile shortly after Zelenskiy declared his candidacy, Russia’s RT.com sized him up as potentially more Moscow-friendly than Poroshenko, but noted he has been criticized in the Duma for mocking Russia in his comedy routines and has “performed for Kiev-backed militias fighting in the east of the country,” so he is “definitely no Kremlin stooge.”

Early in Zelenskiy’s candidacy, journalists discovered he and his business partners – one of whom was also linked to Ilhor Kolomoisky – still owned three film companies in Russia even though he claimed to have shuttered his Russian businesses after the occupation of Crimea. At least one of those companies received funding from the Russian government for a film project, an arrangement he said he had nothing to do with. Zelenskiy defended the companies as bringing profits back to Ukraine but said he was working on divesting himself from ownership.

As for the other candidate running against Poroshenko, Yulia Tymoshenko, her momentum seems to have stalled after her party grew lukewarm on anti-corruption reforms, the U.S. and Europe grew lukewarm about her, voters grew uneasy with her murky business past, and her abrasive style alienated some critics of the current government.