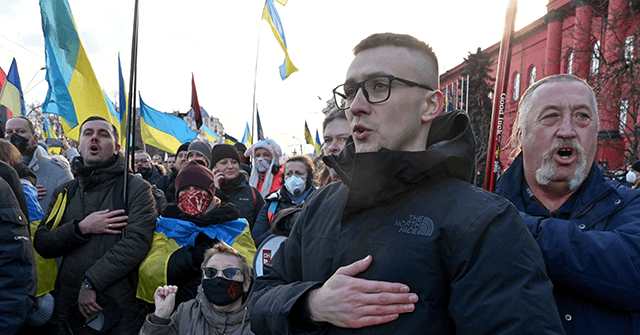 Ukrainian President Volodymyr Zelensky announced on Monday that he had officially decreed Wednesday – which various anonymous reports had pegged as the first date of an alleged Russian invasion – the Ukrainian “Day of Unity,” a holiday to celebrate the country’s sovereignty.

Zelensky had dismissed claims of a February 16 invasion date on Saturday and has expressed significant skepticism that the Russian government would attempt to invade at all since President Joe Biden announced, citing no evidence, that he believed Russian leader Vladimir Putin would do so. During a press conference on January 19, Biden alarmed the world by declaring that he believed Putin had decided to invade Ukraine and that Biden’s White House would not intervene in the event of a “minor incursion.”

On Monday night, Zelensky delivered a televised address in which he confirmed he had received unspecified information that Russia would begin a military attack on the country, but that he was not alarmed because Russia had already invaded eight years ago and the state of Ukraine’s military was currently superior than when Biden was vice president. In March 2014, Putin colonized Ukraine’s Crimea region and began a war in the eastern Donbas region, which Moscow to this day claims is a “civil war” without a Russian presence. Extensive evidence, including the heavy use of Russian weaponry, ties the pro-Russian separatists in Donbas to Moscow.

“We are told that February 16 will be the day of the attack. We will make it the Day of Unity,” Zelensky announced, according to his presidential office. The country will mark the holiday, his office explained, through several patriotic activities.

“According to the document, on February 16 the State Flag of Ukraine will be raised on houses and buildings in all settlements of our country, and at 10:00 the National Anthem will be played,” the official statement from Kyiv read. “In addition, the Cabinet of Ministers of Ukraine must approve an action plan, providing for an increase in monetary payment for the Armed Forces by 30% from March 1, 2022 and increase to 20% from the beginning of 2022 in funding for servicemen of the State Border Guard Service and the National Guard of Ukraine.”

In the announcement speech posted to his Facebook page, Zelensky told Ukrainians to “hang national flags, wear blue and yellow ribbons, and show the world our unity” on that day.

The president’s office also announced the creation of a new “information platform” to combat the confusing messages about the country coming from foreign sources like the White House.

It is not clear where the choice of February 16 as the date of a supposed Russian invasion originated. The Washington site Politico reported on Friday, citing unknown persons, that Biden himself had been telling allied nations that he had reason to believe the Russian military would cross Ukraine’s border again on Wednesday. Politico added that, according to “one person,” the intelligence pointing to that date was “specific and alarming.”

Zelensky appeared to mock the report on Saturday.

“We understand all the risks, we understand that there are risks… If you, or anyone else, has additional information regarding a 100% Russian invasion starting on the 16th, please forward that information to us,” Zelensky told reporters, suggesting he had no such credible information.

“Right now, the people’s biggest enemy is panic in our country. And all this information is only provoking panic and not helping us,” he said elsewhere in remarks Saturday, echoing his pleas to Ukrainians to not act in haste in response to international reports.

Zelensky held an hour-long phone conversation with Biden on Sunday in which – according to Kyiv, but not the White House readout of the call – he invited his American counterpart to Kyiv.

“I am convinced that your arrival in Kyiv in the coming days, which are crucial for stabilizing the situation, will be a powerful signal and contribute to de-escalation,” the Ukrainian presidential office quoted Zelensky telling Biden. The White House not publishing the invitation appears to indicate that Biden is planning to ignore it.

Zelensky has expressed extreme frustration in the past month with the description of most of Ukraine from officials like Biden as a place where Americans could easily fall into a “crossfire.” The U.S. State Department has repeatedly urged Americans to flee the country as soon as possible, even as Zelensky insists that the number of troops on his border with Russia is not significantly different than during the same time in 2021.

“If they want to know what the situation is, they can come to Kyiv. Do we have tanks on the street? No,” Zelensky told reporters in an exasperated press conference in January, where he revealed war panic had cost the country nearly $500 million in foreign investment. “The feeling is, if you’re not here, the feeling is … the image that mass media create is that we have troops on the roads, we have mobilization, people are leaving for places – that’s not the case.”

Biden administration officials had publicly acknowledged that describing a Russian invasion as “imminent” had aggravated ties with Kyiv last week. Secretary of State Antony Blinken adjusted the description of the alleged invasion from “imminent” to “imminent enough” on Sunday.