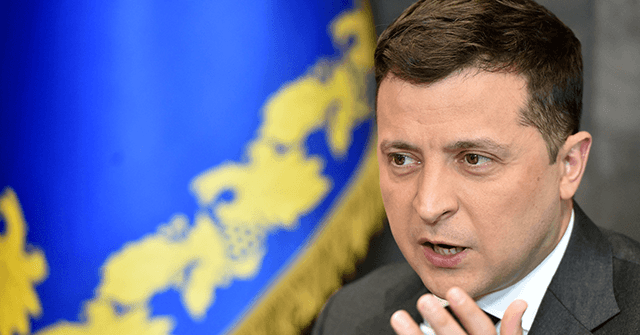 Ukrainian President Volodymyr Zelensky invited his American counterpart Joe Biden to Kyiv to see for himself the absence of any imminent threat of war in a conversation on Sunday after telling reporters officials in his country had no evidence to support the “panic” in the White House about an allegedly imminent Russian invasion.

The Biden administration, and the president personally, have spent much of the year predicting that the government of Russian leader Vladimir Putin has decided to invade and colonize the entirety of the nation of Ukraine, citing the presence of Russian troops on Ukraine’s eastern border. Russia already invaded and colonized a sizable percentage of Ukraine in 2014, when Biden was vice president, and has continued to colonize Ukraine’s Crimea region uninterrupted since then.

America reportedly ordered its embassy employees in Kyiv to evacuate this weekend. Secretary of State Antony Blinken described the threat of war in Kyiv, hundreds of miles from the Russian border, as “imminent enough” on Sunday, an apparent attempt not to violate the White House’s soft ban on using the term “imminent” after repeated protests from the Ukrainian government that Biden was tanking the country’s economy for no apparent reason.

Despite no evidence of any changes on the ground, National Security Advisor Jake Sullivan said on Friday that the possibility of another Russian invasion of Ukraine beginning before the end of the 2022 Beijing Winter Olympics this week was “credible.”

Zelensky, the head of the Ukrainian government, strongly refuted these statements on Saturday.

“Right now, the people’s biggest enemy is panic in our country. And all this information is only provoking panic and not helping us,” Zelensky lamented, adding that his government was aware “that the risks are there” but nonetheless baffled by the “panic” from the United States.

“If you or anyone has any additional information about a 100-percent chance of an invasion,” Zelensky told reporters, “give it to us.”
Zelensky announced that he had spoken to Biden personally on Sunday. Biden once again prioritized speaking to Putin over the leader of the U.S.-allied country. According to Kyiv’s readout of the call, Zelensky invited Biden to Kyiv, presumably to see the risks of a Russian invasion there for himself.

“I am convinced that your arrival in Kyiv in the coming days, which are crucial for stabilizing the situation, will be a powerful signal and contribute to de-escalation,” Zelensky told Biden, according to his presidential office.

Elsewhere in the call, Zelensky insisted that Ukraine “understands all current risks and is ready for any developments,” suggesting that the country’s comparatively calm response to the latest developments on its own border was more appropriate than Washington’s.

“We will stop any escalation towards Ukraine. The capital of Ukraine, Kyiv, and other cities of our state – Kharkiv and Lviv, Dnipro and Odesa – are safe and under reliable protection,” the readout quoted Zelensky as saying.

Biden appears to have ignored the invitation to Kyiv, as it did not appear in the comparatively short White House readout of the same call – which according to Zelensky lasted an hour.

“President Biden reaffirmed the commitment of the United States to Ukraine’s sovereignty and territorial integrity. President Biden made clear that the United States would respond swiftly and decisively, together with its Allies and partners, to any further Russian aggression against Ukraine,” the readout claimed. “The two leaders agreed on the importance of continuing to pursue diplomacy and deterrence in response to Russia’s military build-up on Ukraine’s borders.”

The current wave of Russian war concerns began in late January after Biden claimed in a press conference that the United States would not intervene if Russia executes a “minor incursion” in Ukraine, a comment much of the Western world interpreted as granting Putin his blessing to seize foreign territory. Various White House officials attempted to reverse the damage Biden’s remarks caused by claiming that they had evidence of an “imminent” Russian invasion and that Americans in Ukraine should leave as soon as possible. In a press conference in late January, Zelensky told reporters that the Biden administration and Western panic generally cost the country a nearly $500-million loss of foreign investment in two weeks.

“I mentioned this to President Biden … we need to stabilize the economy of our country because of those signals which say that tomorrow there will be war,” Zelensky said, “because these signals were sent by even leaders of the respected countries, sometimes they are not even using diplomatic language! They are saying, ‘Tomorrow is the war.’”

Just as he apparently told Biden this weekend, at the late January press conference, which lasted nearly an hour, Zelensky also urged people concerned about “tanks on the street” in Kyiv to simply come and visit – the opposite message from the White House, which is demanding Americans leave as soon as possible.

“If they want to know what the situation is, they can come to Kyiv. Do we have tanks on the street? No,” Zelensky said. “The feeling is, if you’re not here, the feeling is … the image that mass media create is that we have troops on the roads, we have mobilization, people are leaving for places – that’s not the case.”

Zelensky has also asserted that the reason his concern does not match America’s is that the Ukrainian government has consistently monitored Russian troop movements on the border and that current Russian troop numbers are about on par with those of the same time of year in 2021, when no such invasion occurred.