President Volodymyr Zelensky presided over a flag-raising ceremony and headed off to the war-torn Donetsk region of eastern Ukraine on Wednesday to celebrate the “Day of Unity,” a holiday he created this week in response to anonymous reports that the Russian military had chosen the date to invade.

Zelensky’s announcement on Monday that he had declared the day a holiday – celebrated with a pay raise for soldiers, Ukrainian flag rallies, and other patriotic events – triggered international panic and temporarily hurt global markets, as corporate news outlets reported his speech as a serious declaration that Russia would definitely invade Ukraine this week. The poor reporting forced the Ukrainian presidential office to issue a clarification that Zelensky declaring that the Russians would invade on Wednesday was “irony” and a reference to anonymous media reports. Zelensky, a professional comic before becoming president, has repeatedly confused corporate media by using humor.

“We are told that February 16 will be the day of the attack. We will make it the Day of Unity,” Zelensky said in a national address on Monday. “The relevant decree has already been signed. On this day, we will hoist national flags, put on blue and yellow ribbons and show the world our unity.”

While the announcement of the attack was a joke, the patriotism on display on Wednesday was not. Ukrainians took to the streets in their blue and yellow national colors and embraced the theme of sovereign unity in response to Zelensky’s call. 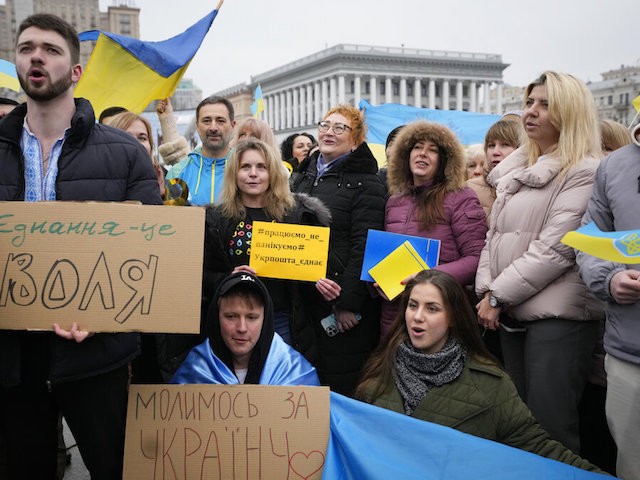 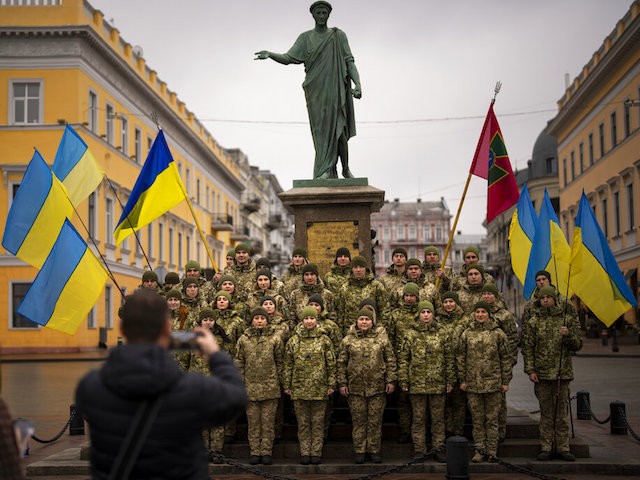 Ukrainian Army soldiers pose for a photo as they gather to celebrate a Day of Unity in Odessa, Ukraine, Wednesday, Feb. 16, 2022. (AP Photo/Emilio Morenatti)

In Kyiv’s Olimpiyskyi National Sports Complex, revelers decorated the stadium in blue and yellow and unfurled a massive Ukrainian flag that appeared to circle the entire stadium track. 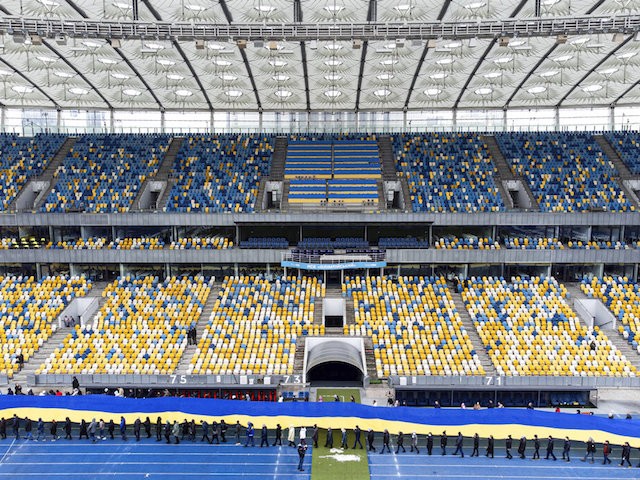 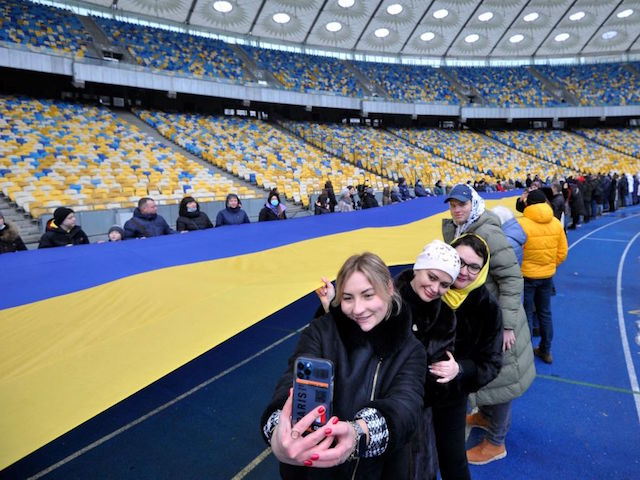 People take pictures as they carry a giant Ukraine’s national flag at a stadium to mark a “Day of Unity” in Kyiv on February 16, 2022. (SERGEI CHUZAVKOV/AFP via Getty Images)

Zelensky himself marked the occasion by attending a flag-raising ceremony and issuing an address before departing to Donetsk and Rivne.

“Together we mark the Day of Unity! Unity of a great people of great Ukraine! This day is ours,” Zelensky said, according to the official site of the Ukrainian presidency. “Of those who live on the right and left banks of the Dnieper. In cities and villages. Near the Carpathians and spoil tips. On the coast of the Black Sea and the Sea of Azov. Who speaks Ukrainian, Crimean Tatar, Russian, Hungarian or sign language, and together – create Ukraine not in words but in deeds!”

The primary source of the February 16 date appears to be a report in the Washington outlet Politico from last week that cited “a person familiar” who claimed that American President Joe Biden was telling allied nations that Russian leader Vladimir Putin had chosen to invade Ukraine on Wednesday.

An exasperated Zelensky mocked the Politico report in statements on Saturday that largely went unreported in the West, resulting in corporate outlets attributing the February 16 date to the president.

“If you, or anyone else, has additional information regarding a 100 percent Russian invasion starting on the 16th, please forward that information to us,” Zelensky told reporters this weekend, complaining that the Biden administration and other Western governments insisting that a full-scale war with Russia would happen was detrimental to Ukraine.

“Right now, the people’s biggest enemy is panic in our country. And all this information is only provoking panic and not helping us,” Zelensky asserted.

While the Biden administration repeatedly warns of an “imminent enough” Russian election, in reality, Putin invaded Ukraine in March 2014, when Biden was vice president, and his military remains illegally present in Ukraine’s Crimea region as well as Donetsk, where Zelensky will be later on Wednesday, and Luhansk, collectively known as the Donbas region. Moscow has formally “annexed” Crimea but denies its proven involvement in Donbas.

At press time, predictions of a full-scale Russian invasion beginning on Wednesday have yet to materialize. The Russian government claimed on Tuesday that the military buildup in Crimea and on Ukraine’s border that had prompted war panic was soon ending, as the military exercises the troops were participating in had ended.

“As combat training measures are coming to a close, the troops, as is always the case, will conduct combined marches to their permanent garrisons,” a spokesman for the Russian Defense Ministry said. “Units of the Southern and Western Military Districts that have accomplished their tasks have already begun loading personnel and equipment on railway and auto transport means and will today begin heading to their military garrisons.

Several Western governments, including the Biden administration, have expressed skepticism at the claim.

Zelensky has attempted to emphasize, with little success in American corporate media, the fact that the number of Russian troops in and near Ukraine currently is not significantly different than during the same timeframe in 2021, when little concern existed for Ukraine.

“I don’t think the situation is more intense than it was at that time, at peak time in 2021,” Zelensky told reporters during a press conference in late January. “There was no such coverage at that time of Ukraine.”