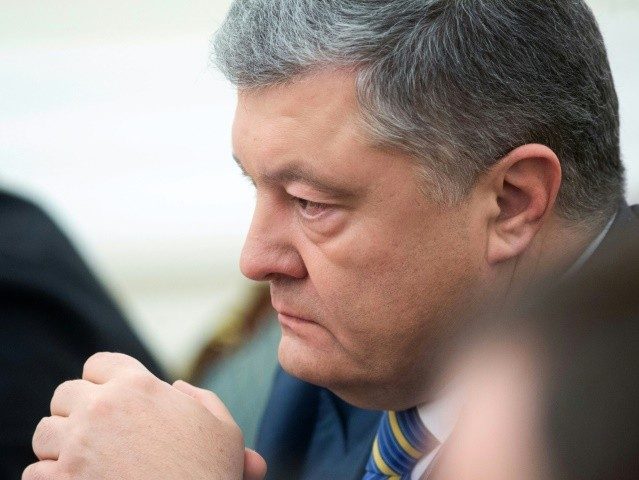 The Border Guard Service of Ukraine announced a ban on Friday on male Russian nationals between the ages of 16 and 60 entering the country for the duration of martial law, currently scheduled to last 30 days.

The Russian Foreign Ministry did its part to ratchet up tensions by threatening to “lose patience” and begin seizing undetermined amounts of Ukrainian real estate located around Russian diplomatic facilities.

Ukraine’s Unian information agency reported President Petro Poroshenko and the head of the Border Guards, Petro Tsyhikal, made it clear the goal of the travel ban is to keep Russia from infiltrating Ukraine with covert agents the way Crimea was salted with the infamous “little green men” before Russian annexed it in 2014:

There will be exceptions for humanitarian purposes, such as family visits on the occasion of a funeral ceremony. Tsyhikal said that the border guard agency had been put on top combat readiness, while border squads deployed along the border with Russia and the de-facto border with the illegally annexed Crimea were strengthened.

“As for the citizens of Ukraine, there are no restrictions,” Tsyhikal said.

Ukrainian President Petro Poroshenko asked whether these were “measures that prevent the Russian Federation from forming detachments of private armies here, which are in fact representatives of the Armed Forces of the Russian Federation, and to not allow them carrying out operations they tried to implement in 2014.” Tsyhikal nodded affirmatively.

“That is, once again: the restriction applies to males aged 16-60, except for humanitarian cases, which will be clearly written out in the instructions,” Poroshenko stressed.

“And I would tighten registration requirements for citizens of the Russian Federation in areas where the martial law was imposed. I am asking you to submit proposals within 24 hours,” the president said.

“There have also been a number of reports in the last 24 hours of Russian women being denied entry to Ukraine, suggesting that the restrictions on Russians could be broader than publicly announced,” the UK Guardian wrote on Friday.

The Ukrainian navy indicated on Friday it has been ordered to cancel patrols and stay in port at a high state of readiness to avoid antagonizing the Russians or give them an excuse to attack Ukrainian ships again.

Military officials said the Russians are allowing Ukrainian commercial ships to pass between the Black Sea and Sea of Azov using the Kerch Strait, which separates mainland Russia from Russian-annexed Crimea. Passage through the strait was described as slow going for Ukrainian vessels but the Russians have not completely blockaded the strait.

Reporters asked Russian Foreign Ministry spokeswoman Maria Zakharova if Russia might move its diplomatic operations out of the big Ukrainian cities and into more hospitable locations in the Russian-occupied Donbas region to keep them safe from Ukrainian demonstrators.

“You know, our recent historical example suggests that sometimes there is no need for such transfer. Sometimes it turns out that it’s the status of diplomatic institutions that changes,” Zakharova replied. “For example, we had our General Consulate in Simferopol, and then it became a representative office of our Foreign Affairs Ministry in our region. Something like this.”

Simferopol is the administrative center of Crimea, so Zakharova was effectively saying that moving imperiled diplomatic facilities from Ukraine to Russia is more work than simply annexing the ground those buildings stand upon and turning them into Russian turf.

Ukraine’s state security service on Friday raided the home of Father Metropolitan Pavel, a Russia-backed Orthodox priest and administrator of the Kiev Pechersk Lavra, one of Ukraine’s most famous and frequently visited religious sites.

Pavel is reportedly under investigation for “violating citizens’ equality depending on racial ethnicity, religious convictions, incitement of inter-confessional hostility.” He questioned the legality of the investigation in a statement on Friday and suggested it was part of a politically-motivated pressure campaign against Orthodox clergy linked to Moscow.

President Poroshenko announced on Thursday that Ukraine is working on setting up its own independent branch of the Orthodox Church under a charter drafted this week by the Patriarchate in Istanbul.